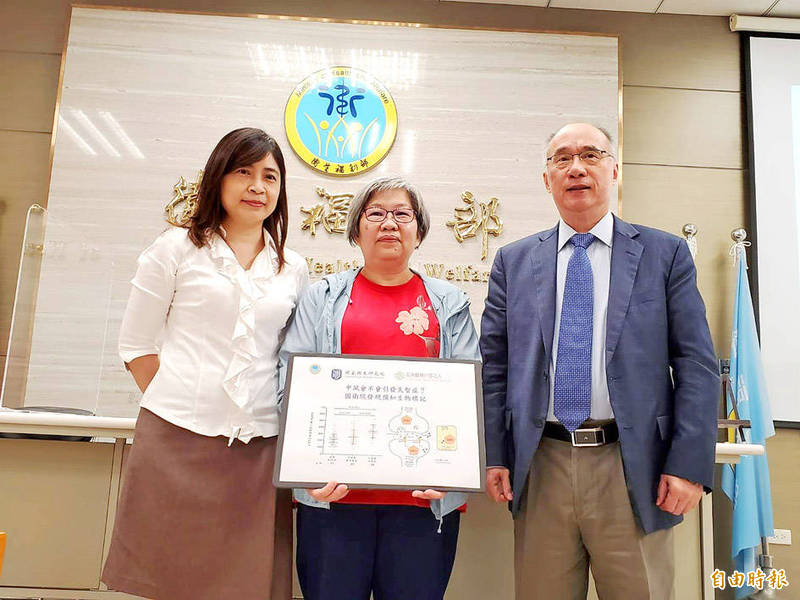 From left, Chen Yi-chun, a physician at Linkou Chang Gung Memorial Hospital’s Department of Dementia, Liu Yu-li, a researcher at the National Health Research Institutes’ （NHRI） Center for Neuropsychiatric Research, and NHRI president Liang Kung-yee pose for a photograph after a news conference at the Ministry of Health and Welfare in Taipei yesterday. Photo: Lin Hui-chin, Taipei Times

A team of National Health Research Institutes （NHRI） researchers yesterday said that it has discovered a biomarker that could one day help predict the risk of post-stroke dementia （PSD）.

Liu Yu-li （劉玉麗）, an investigator at the NHRI Center for Neuropsychiatric Research, said cerebral stroke is a known risk factor for vascular dementia and Alzheimer’s disease, and studies suggest that about 30 percent of people who have had suffered a stroke might develop PSD later in life.

Clinical data also show that people who have survived a stroke usually recover within 26 weeks, but about one-third might suffer cognitive impairment, she said.

About 7.4 percent of people develop dementia within a year of their first stroke, while people who have had repeated strokes have a PSD incidence rate as high as 41.3 percent, Liu said.

The lack of a biomarker has made it difficult to accurately predict the risk of PSD in stroke patients, she said.

These patients included 20 people with PSD and 53 people who did not have PSD, with a control group made up of 71 healthy people of a similar age and gender.

The team found that the D-amino acid oxidase （DAO） levels in the blood plasma of PSD patients were significantly higher than in stroke patients without PSD or healthy people, indicating that DAO could be a biomarker for predicting PSD in stroke patients, Liu said.

The mortality rate of strokes has fallen as medical technology has advanced, but while stroke patients could gradually recover physical functions, brain degeneration and dementia have often been neglected, Chen added.

With further studies and cross analysis, it might be possible to predict the risk of PSD in stroke patients from the DAO level in their blood samples, she said.

As there is no effective medication for treating dementia, the best way to prevent a stroke or PSD is to maintain healthy habits, including controlling blood pressure, blood sugar and lipid levels, and weight, avoiding smoking and exercising regularly, Chen said.

《TAIPEI TIMES》 Ractopamine not in all US po…