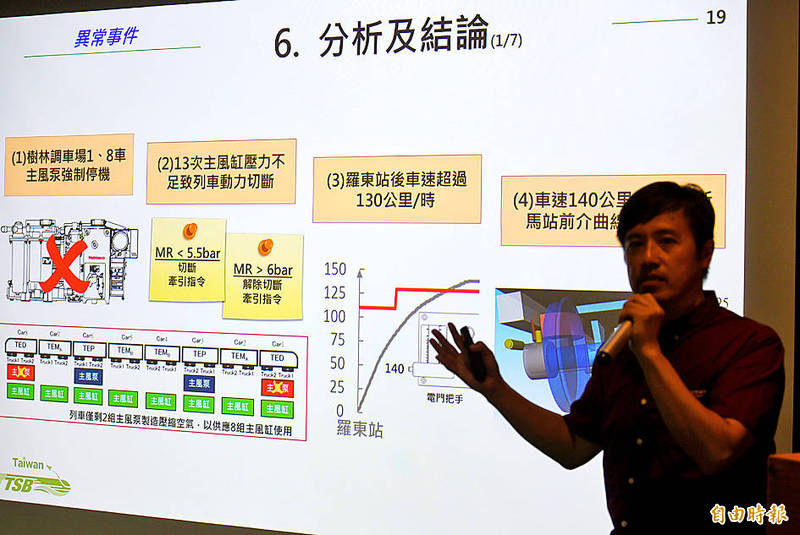 Taiwan Transportation Safety Board Chief Investigator Lin Pei-ta yesterday at a news conference in Taipei presents the results of an investigation into the derailment of Puyuma Express No. 6432 in 2018. Photo: Fang Pin-chao, Taipei Times

DEADLY ERRORS: The safety board’s investigation found that the driver did not report malfunctions to dispatch, and lacked adequate training to address issues

The Taiwan Transportation Safety Board yesterday identified 50 factors that led to the derailment of a Puyuma Express train in Yilan County in 2018, and gave the railway operator three months to report on how it plans to follow the board’s safety recommendations.

The board yesterday published online its final report following a one-year investigation into the Oct. 21, 2018, derailment of Puyuma Express train No. 6432, which killed 18 people and injured 291.

Chief investigator Lin Pei-da （林沛達） highlighted some of the key findings at a news conference in Taipei, including that the Taiwan Railways Administration （TRA） driver operating the train at the time of the incident, as well as the previous driver of the train, failed to report to inspectors malfunctioning air compressors in cars No. 1 and No. 8, where forced outages occurred.

Additionally, the TRA failed to clearly stipulate the minimum requirements that a train must meet before it can operate, such as the number of functioning air compressors it has, Lin said, adding that the agency missed the opportunity to change train cars.

The train’s tilting mechanism, which was activated whenever the train moved through a curve along the route, also consumed a large amount of compressed air in the main reservoir, he added.

The agency also lacks training and certification systems for drivers operating the Puyuma Express, and as a result, the driver failed to accurately identify in time the causes of intermittent power issues, Lin said.

The driver not only delayed reporting problems to dispatchers, he also failed to tell them the error code shown on the driver display unit and read to them the value displayed on the pressure gauge, Lin said.

The driver also told dispatchers that he thought the problems were caused by a malfunctioning automatic train protection （ATP） system, Lin said, adding that this explained why the dispatchers were unable to provide timely and effective assistance.

The driver’s failure to check the pressure gauge and erroneously turning off the ATP without first telling dispatchers resulted in the train losing its speed-limit mechanism, Lin said.

Although the train manufacturer’s operation manual states that a driver must stop the train immediately and await further instructions if the pressure in the main reservoir falls below 6.5 bars, the driver did not consult the gauge and attempted to resolve the problem by himself, Lin said, adding that this was because the TRA had not provided operators of Puyuma Express trains the relevant materials to learn how to handle such a situation.

The investigation also found that the driver was under tremendous pressure to continue operating the train, as the intermittent power output had already caused delays, Lin said.

Dispatchers also told the driver that he should keep going as long as the train was still functioning, and a request to temporarily stop at Toucheng Station （頭城） was denied by the station master due to a miscommunication, Lin said.

After departing Luodung Station （羅東）, the driver placed the throttle at 140kph and continued to communicate with dispatchers and inspectors to fix circuit breakers and other issues, Lin said.

As such, he failed to heed the 75kph speed limit sign at 4:49.20pm, seven seconds before the derailment, Lin said.

“From the recorded conversations, we know that the driver kept trying to resolve problems caused by malfunctioned air compressors from 4:49.19pm to before the train derailed at 4:49.27pm. When he tried to read out the error code for air compressors, he sounded hesitant, which showed us that he was probably trying to read the code on the panel and was scrambling to resolve problems. It was almost impossible for him to notice the speed limit during this time,” Lin said.

Although drivers were told to pay attention to train operation after an ATP is isolated, the TRA did not list specific actions that drivers must take, nor were drivers trained to respond to calls and questions over the radio in a standardized manner, he said.

Unlike what the driver had claimed, the ATP system was operating properly before he turned it off, the investigation showed.

However, the train manufacturer’s design placed air compressors under the train cars, where they can be affected by foreign objects on the tracks, causing the blades on the compressors’ coolers to accumulate dirt, it said.

As such, air compressors on cars No. 1 and No. 8 had frequent forced outages, the report showed.