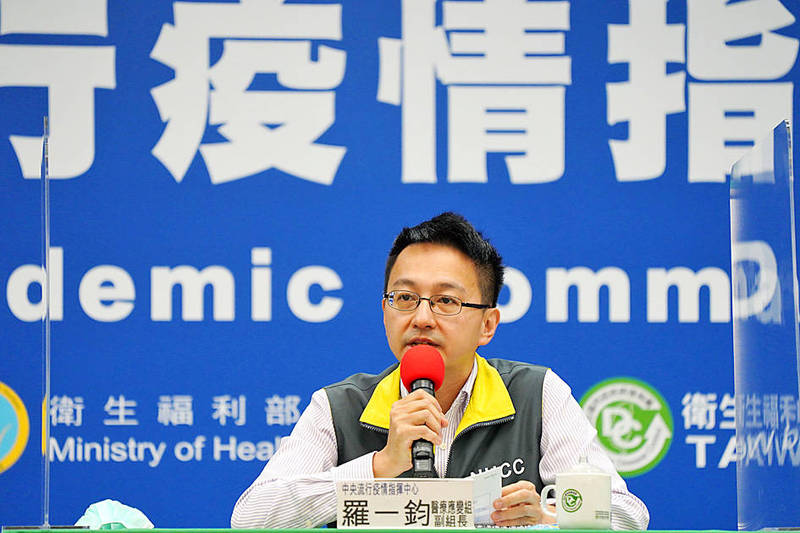 EXPANDED TESTING: The CECC has started retesting 31 people whose test specimen was used in the same machine to address any issues with the device

Centers for Disease Control Deputy Director-General Philip Lo （羅一鈞）, who is also deputy chief of the CECC’s medical response division, said that the five cases are the nation’s 536th to 540th confirmed cases of COVID-19.

Case No. 536 is a Taiwanese man in his 20s, who works in France and last departed Taiwan in August last year, Lo said.

Upon his arrival on Oct. 11, the man told quarantine officers that he had a sore throat two days earlier, so he was tested at the airport, but the result was negative, Lo said.

On Monday and Tuesday last week, the man was coughing, and had diarrhea, fatigue and difficulty breathing during quarantine, but did not report his conditions to the local health department, believing them to be due to allergies and asthma, Lo said.

However, the man was tested again on Friday last week as part of an expanded testing program, and was confirmed positive yesterday, Lo said, adding that six passengers who sat near the man on his flight to Taiwan have been placed under home isolation.

Lo said that a second test was arranged because case No. 530, a Taiwanese man returning from China’s Jiangsu Province, reported by the CECC last week, tested positive at the airport, but not in subsequent tests, nor did his close contacts, so the CECC wanted to clarify the situation.

The expanded testing program was launched to retest 31 cases, whose specimens had been placed in the same machine as No. 530, Lo said.

The two cases were not close contacts and had arrived in different airport terminals at different times, he said, adding that the CECC advisory specialist panel would later address the test results of the expanded program, with a report expected next week.

Case No. 540, confirmed yesterday, is a Russian student in her teens, who tested negative for COVID-19 in another country on Oct. 7, before she arrived in Taiwan on Oct. 9, Lo said.

The student experienced loss of smell on Friday last week and was tested on Saturday, with the result confirmed positive yesterday, Lo said, adding that she had traveled in Turkey for a few days after leaving Russia, so she could have contracted the disease in either country.