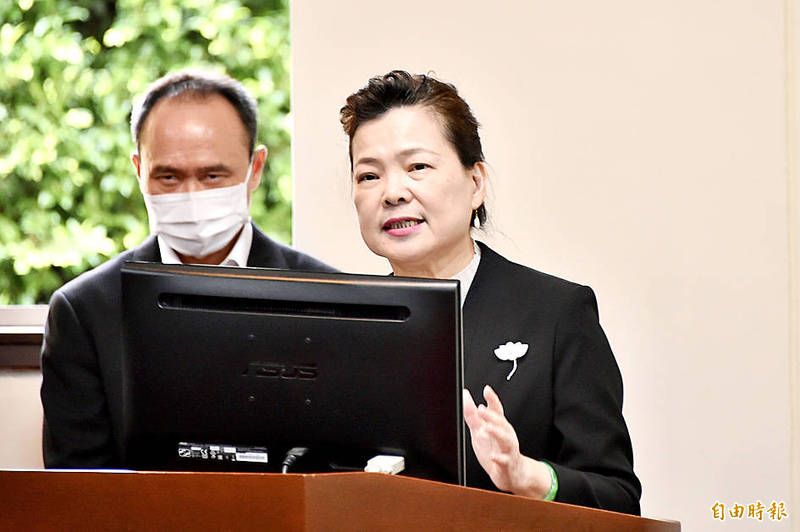 LEANNESS-ENHANCING DRUG: Assigning a commodity classification to meat containing ractopamine could come under scrutiny by the WTO, the economic affairs minister said

Facing a barrage of questions from lawmakers at a meeting of the legislature’s Economics Committee, Wang said that giving meat containing residues of ractopamine a commodity classification code would sow confusion and could come under scrutiny by the WTO.

“Ractopamine is not a [meat] product, it is an additive,” said Wang, when questioned by Taiwan People’s Party （TPP） Legislator Chiu Chen-yuan （邱臣遠）. “If we had a serial code for every additive it would cause confusion. There is no precedent for this internationally.”

“Why not be the first?” Chiu asked.

Wang said that a product code for meat containing ractopamine would be “inconsistent with WTO regulations.”

“The average Taiwanese does not about WTO rules,” Chiu said. “They are just worried about what they are eating.”

Ractopamine is a leanness-enhancing drug that some US farmers give to their cattle and swine. It is banned in the EU and some other countries amid concern that it could adversely affect human health.

President Tsai Ing-wen （蔡英文） on Aug. 28 announced that Taiwan would lift the bans on US pork containing ractopamine and beef from cattle more than 30 months old, which is scheduled to take effect on Jan. 1.

Wang said there must be a “scientific basis” for singling out meat containing ractopamine.

“We have been importing US beef [from cattle under the age of 30 months] for eight years, and US pork is exported to more than 100 countries, while only 24 countries ban it,” Wang said. “If it was not safe, we would not lift the ban.”

Chinese Nationalist Party （KMT） Legislator Lai Shyh-bao （賴士葆） challenged Wang, asking the minister to livestream for a month herself eating US pork to prove that it is safe.

“After January 1, I want you and your husband to eat US pork for lunch or dinner every day for a month for all of use to see,” he said.

Wang said she would eat US pork, “but it is not necessary to eat it for a whole month in front of the camera,” she said, adding: “Taiwanese pork tastes better.”

Wang reiterated that importing US pork is a necessary step to further solidify Taiwan-US trade ties, to which KMT Legislator Yang Chiung-ying （楊瓊瓔） asked, if there have been any advancements in bilateral ties since Tsai’s announcement that she was lifting the ban.

“When are we going to sign a bilateral trade agreement [BTA] with the US?” Yang asked.

The ban “is an obstacle to the BTA,” Wang said.

“We must remove the obstacle first to fight for the next step,” she added.