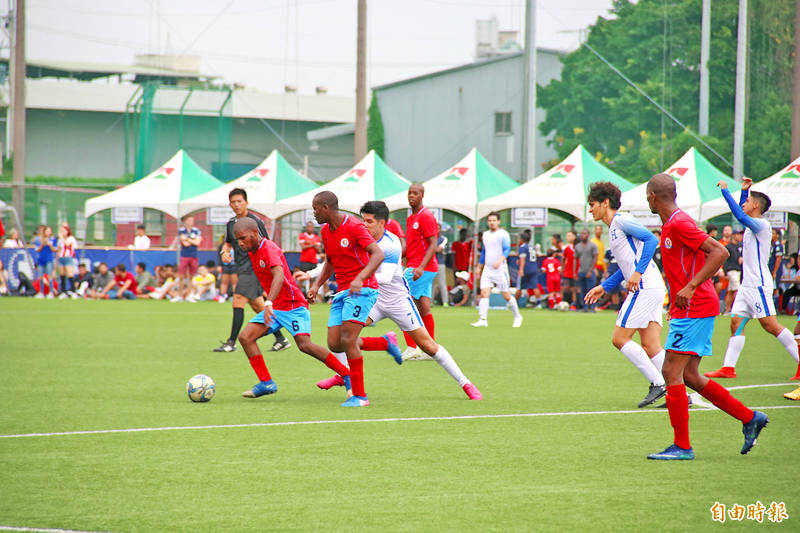 An annual soccer tournament featuring Latin American and Taiwanese teams yesterday started in New Taipei City, highlighting the bonds among Taiwanese and the people of the region.

About 1,000 people turned out to watch matches among 23 teams from 13 countries on the opening day of the Copa America Taiwan at a time when sports events across the world are facing challenges due to the COVID-19 pandemic.

The tournament, which hosts men’s, women’s and children’s categories and ends today, is being streamed live on social media and recorded for later broadcast elsewhere, organizers said.

For the first time since the tournament was launched in 2014, the Guatemalan Association in Taiwan and Taiwan Digital Diplomacy Association （TDDA） are working together to extend the reach of the games beyond spectators in Taiwan, said Juan Fernando Herrera Ramos, one of the tournament’s organizers.

Civic diplomacy is Taiwan’s primary means of developing relations with other nations, as it contends with international isolation and seeks to raise its visibility on the world stage, the TDDA said.

“We hope to bring together people who are interested in strengthening Taiwan-Latin America relations, paving the way for future cooperation,” TDDA chairwoman Kuo Chia-yo （郭家佑） said.

The tournament also highlights that Taiwan can host events with live spectators, because of its success in handling COVID-19, the association said.

Guatemalan Ambassador Willy Alberto Gomez Tirado said that the games offer an opportunity for Latin American countries to show their gratitude to Taiwan, “as we can still gather together and celebrate our friendship.”

One of the spectators at the opening matches, Ana Isabel Ruiz Becerril of Mexico, said that she felt like she was back home, as she sees all these people from Latin America as family.

Becerril, who has had to extend her stay in Taiwan for another six months until January next year due to the pandemic, said that she appreciates life in Taiwan during these difficult times.

One of the players, Dale Neal of Belize, said that he has competed in the Copa America Taiwan for the past five years and is happy to see people from Latin America, Taiwan and other countries having fun this year.

“I believe we will have a good chance to get to the final,” he added.

Four of Taiwan’s 15 diplomatic allies — Nicaragua, Guatemala, Honduras and Paraguay are participating in the tournament, which is being held at Fu Jen Catholic University, with free admission.