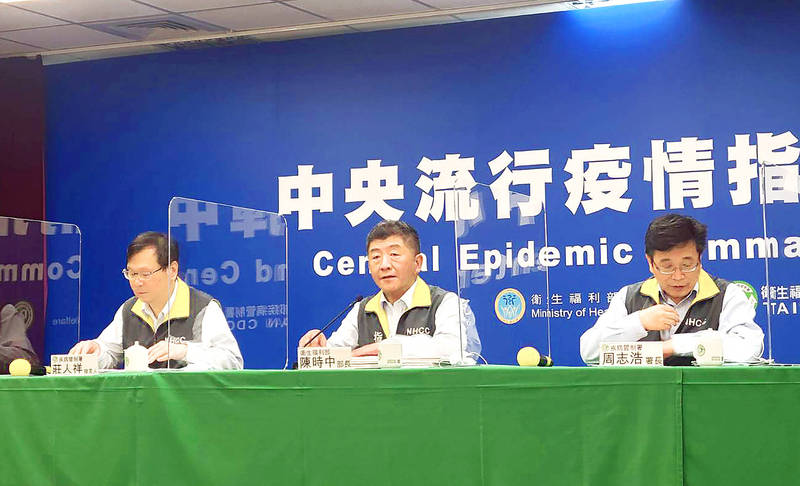 Minister of Health and Welfare Chen Shih-chung, center, discusses the temporary suspension of government-funded influenza vaccines for people aged 50 to 64 at a news conference in Taipei yesterday. Photo: CNA

PROTECTING THE ‘HERD’: The flu shot program has nearly met its target for people aged 50 to 64, while those in higher-risk groups need to catch up

Minister of Health and Welfare Chen Shih-chung （陳時中） yesterday apologized for the temporary suspension of government-funded influenza vaccines for people aged 50 to 64, and said that not all eligible people need to be vaccinated to achieve herd immunity.

Chen said that the sudden announcement of the suspension on Friday inconvenienced people who had made an appointment to receive a flu shot, and created work for healthcare practitioners and borough officials.

“The main purpose of administering the government-funded vaccines is to achieve heard immunity, which can be reached with a vaccination coverage rate of about 25 percent,” he said, adding that the 7.48 million government-funded and pay-out-of-pocket vaccines procured this year are enough to cover 31.5 percent of the population.

As not all people need to be vaccinated, people at heightened risk of developing complications from the flu or spreading the disease should be prioritized, Chen said.

People aged 50 to 64 who do not have underlying health conditions are not considered to be at high risk, but their vaccination rate this year has been much higher than last year — so far more than 770,000 people have received a flu shot, compared with about 530,000 in the same period last year, Chen said.

The ministry decided to suspend the group’s eligibility to ensure that higher-risk groups can meet the government’s targeted vaccination rates, he said.

The flu vaccination rate has soared in the first 12 days since the program began on Oct. 5, with more than 3.18 million doses — 52.8 percent of the total vaccines — having been administered as of Friday, the Centers for Disease Control （CDC） said.

In comparison, the target coverage rate for people aged 50 to 64 is 18.7 percent, while the administration rate has reached 14.7 percent, which is much closer to the target, he said.