《TAIPEI TIMES》 Taiwan must ‘fortify’ against attack: US 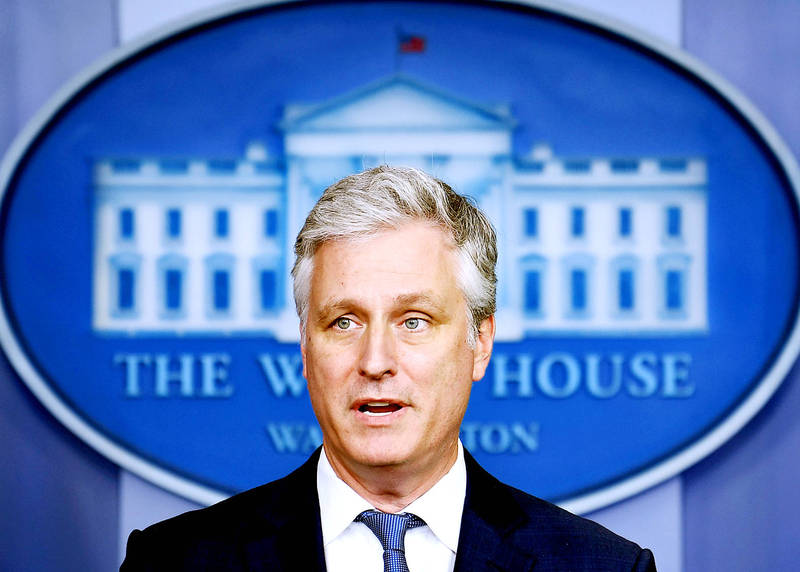 US National Security Adviser Robert O’Brien speaks during a news conference on Aug. 13 at the White House in Washington. Photo: AFP

ATTACK UNLIKELY: China would become ‘pariahs internationally for just the wanton destruction of Taiwan’ and would have little to gain from it, Trump’s security adviser said

A top White House official on Friday urged Taiwan to build up its military capabilities to protect against a possible invasion by China, saying that Beijing would have that ability in 10 to 15 years.

US President Donald Trump’s National Security Adviser Robert O’Brien told the Aspen Security Forum that a missile attack by China against Taiwan would be much too destructive.

An amphibious attack is a possibility, although at the moment it is beyond China’s capability, he said.

However, China could combine that threat with “gray zone” operations, embargoes, harassment and other actions to intimidate the nation if Taipei does not build up its defense, O’Brien said.

“What we told our Taiwanese friends is knowing all this, whether there’s an amphibious landing, a missile attack, a gray-zone-type operation, they really need to fortify themselves,” he said.

“Taiwan needs to start looking at some asymmetric and anti-access area-denial strategies ... and really fortify itself in a manner that would deter the Chinese from any sort of amphibious invasion or even a gray zone operation against them,” O’Brien said.

China has stepped up pressure against Taiwan over the past year, sending attack and surveillance aircraft into its airspace and ships near its waters.

At the same time, news reports said that Taiwan was close to buying missile systems from the US.

For decades, Taiwan’s security has relied in part on close relations with the US, but there has always been ambiguity over whether Washington would intervene and defend the nation if China attacks.

While China has a large number of missiles pointed at Taiwan, O’Brien said that he did not think Beijing currently wants to attack Taiwan.

“I don’t know what they would gain from that,” he said. “If they did that, maybe they would certainly become pariahs internationally for just the wanton destruction of Taiwan.”

Pointing to China’s massive naval buildup, he said: “Maybe in 10 or 15 years, they’d be in better shape to do it.”

Defense News this week reported that the US is planning to sell several arms systems, including missiles and Reaper drones, to Taiwan.