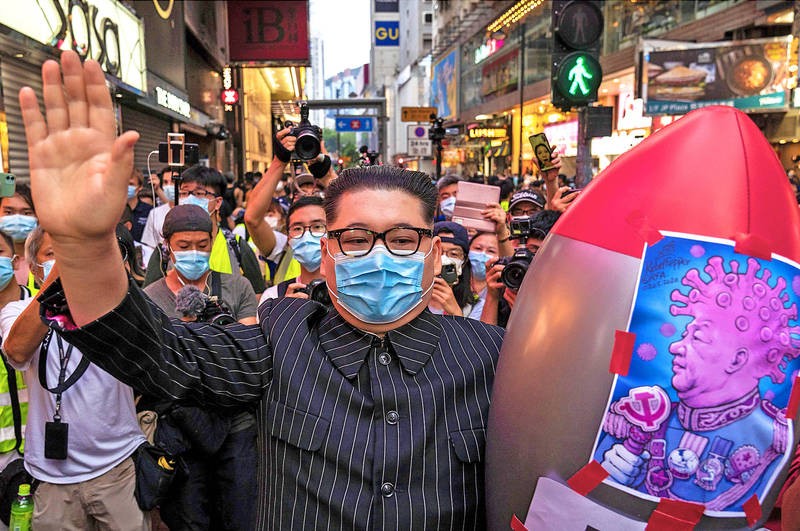 ‘PEACE RESTORED’: Carrie Lam told a ceremony that ‘our society has returned to peace,’ and that ‘national security has been protected’ and rights can be exercised

The People’s Republic of China celebrates its founding on Oct. 1, but in Hong Kong it has become a day of grievance for those worried about authoritarian Beijing’s intensifying crackdown against its opponents.

Protest has been effectively outlawed for most of this year due to COVID-19 restrictions on gatherings and Beijing also imposed national security legislation on the territory in June.

“Over the past few months, an indisputable fact in front of everyone is that our society has returned to peace,” Lam said.

“Our country’s national security has been protected in Hong Kong, and our citizens can again exercise their rights and liberties in accordance with laws,” she said.

Police said that at least 60 were detained, mostly for “unlawful assembly.”

Officers raised banners warning people that they were breaching the national security legislation with their protest chants.

Authorities denied permission for a protest march this year, citing security concerns and a ban on more than four people gathering in public amid the pandemic.

A police source told reporters that 6,000 police officers had been drafted to stop any protests — double the contingency usually placed on reserve.

Throughout the morning, groups of prominent democracy advocates held small protests — deliberately keeping to no more than four people.

“In today’s China, those who pursue freedom are suppressed, while those doing the suppressing are in power,” activist Lee Cheuk-yan （李卓人） told reporters.

One group, surrounded by about 40 police officers, chanted: “End one-party rule” and burned a protest petition.

Others gathered outside the heavily guarded Hong Kong Liaison Office, which represents Beijing’s government in the territory.

A day earlier, office director Luo Huining （駱惠寧） gave a speech calling for more patriotism to be instilled in Hong Kong, saying pride in the motherland was a duty, not a choice.

Officers quickly stopped and searched, or warned to leave, people deemed suspicious — one man playing a protest song on a whistle, another waving a yellow balloon, the color associated with the democracy movement.

One protester, who gave only his first name Ricky, said he had chosen to read Hong Kong’s Apple Daily newspaper — a pro-democracy publication — in public.

“Everyone knows that under the national security law you can no longer say many things, but I still want to come out, even if it’s only a tiny effort I can make,” he told reporters.