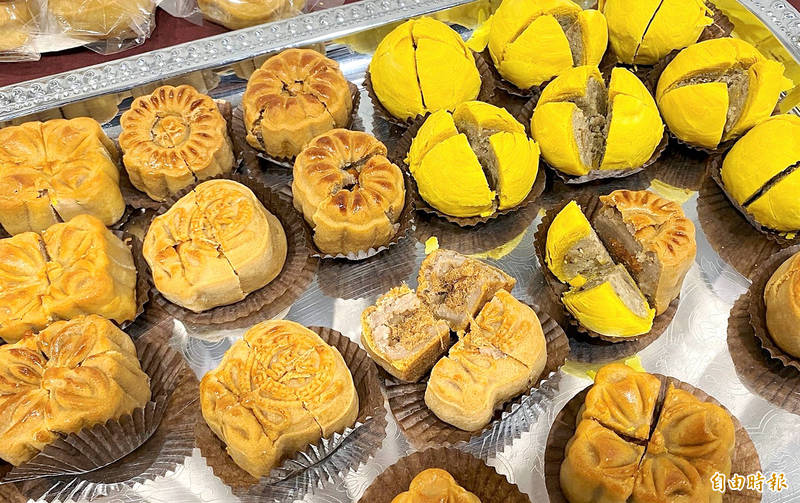 Mooncakes made of water chestnuts are pictured at a news conference in Tainan on Friday last week to promote the Water Chestnut Festival, which is to take place on Saturday and Sunday. Photo: Yang Ching-cheng, Taipei Times

The Health Promotion Administration （HPA） yesterday recommended a “3-3-3 principle” for eating healthy when barbecuing over the Mid-Autumn Festival long weekend.

As many people enjoy eating barbecue during the holiday, the agency warned the public that eating too much barbecue or red meat and exercising too little can increase the risk of colorectal cancer.

Colorectal cancer has been the top most common type of cancer in Taiwan for 12 consecutive years and is the third-most common cause of cancer deaths, it said, adding that 6,436 people last year died of the disease, or 18 people per day.

Its incidence rate among Taiwanese aged 50 or older who have not been screened for it is about 7 percent, or one in every 14 people, the agency said, citing data from 2017.

It recommends “three more” — more fruit and vegetables, more water and more exercise — “three less” — less salt and oil, less red meat and less sauce — and “three minus” — minus the skin, minus butter and minus burned food.

People would feel fuller by eating more fresh fruits and vegetables for a variety of vitamins and minerals, as well as dietary fiber; they should drink water, not sugary beverages; and do more exercise, it said.

The WHO has suggested that 21 to 25 percent of colorectal cancer cases are linked to insufficient physical activity, the agency added.

Vegetable-based oils are better and cooking oil should not be heated for a long time, it said.

The International Agency for Research on Cancer has said that consuming more than 50g of processed meat or 100g of red meat per day can increase the risk of colorectal cancer by 17 to 18 percent.

Sauces are usually high in sodium, the agency said, adding that removing skin from meats and not using butter on barbecued foods can lower their calorie content, and reduce the amount of fat and trans-fatty acids.