《TAIPEI TIMES》 Troops would never back down: Yen 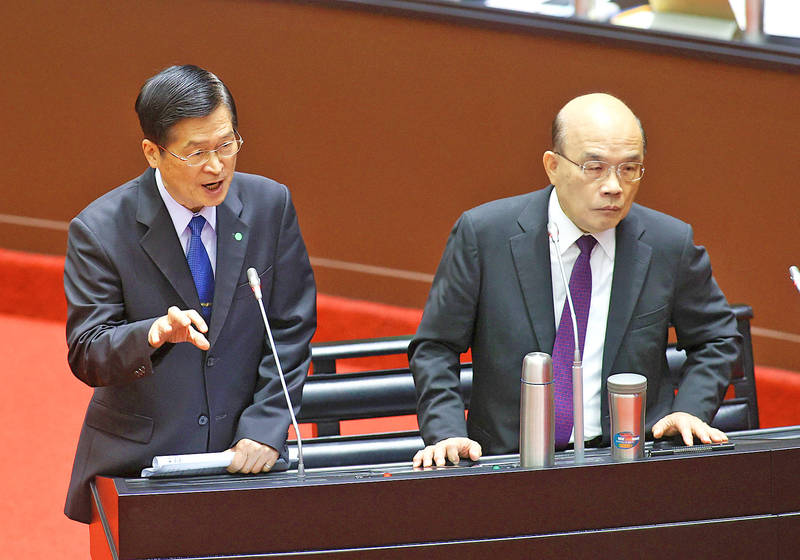 Minister of National Defense Yen De-fa, left, accompanied by Premier Su Tseng-chang, comments on US arms sales to Taiwan during a question-and-answer session at the Legislative Yuan in Taipei yesterday. Photo: CNA

NO SIGN OF WAR: Only if Taiwanese showed determination to defend the nation would others be willing to help in the event of a Chinese attack, the premier said

Should China launch a war against Taiwan, the military would fight to the last standing person, Minister of National Defense Yen De-fa （嚴德發） said yesterday, adding that the nation has fully fleshed-out defense strategies.

“Beijing has continued its acts of provocation against Taiwan, but there are currently no signs that it is ready to launch a full-scale war,” Yen said at the Legislative Yuan in Taipei.

Asked how long Taiwan could withstand an attack from China, Premier Su Tseng-chang （蘇貞昌） said: “Taiwan will not fall.”

Any belligerent force that initiates acts of war would pay a heavy price, and so too would Beijing, he said.

“I believe that Taiwan will persevere forever,” Su said.

Taiwanese would not yield and would stand their ground to defend their nation’s sovereignty, he added.

Taiwan must be prepared for the eventuality of war, although it does not welcome it, Su said, calling on countries in the region to support peace.

Chinese Nationalist Party （KMT） Legislator William Tseng （曾銘宗） asked whether the US would come to Taiwan’s aid in the event of war.

Su said only Taiwan’s citizens can be expected to save their country.

“Only when we demonstrate our resolve to defend ourselves will others be willing to help,” Su said.

A clear indicator of a massive operation being planned would be if the Chinese People’s Liberation Army （PLA） troops were deployed from inland provinces to coastal provinces, Yen said.

Many Taiwanese are worried that there could be war at any time, with PLA Air Force planes flying into Taiwan’s air defense identification zone and crossing the Taiwan Strait median line more than 28 times this year, KMT Chairman Johnny Chiang （江啟臣） said.

When Chiang asked whether the PLA aerial incursions should be taken as a sign that China is ready to invade Taiwan, Yen said Taiwanese forces are maintaining peacetime levels of combat readiness and have not stepped up their alert status.

Yen sidestepped questions about the possibility of the US selling offensive weaponry to Taiwan given strained US-China relations, saying only that Washington is making adjustments based on the regional situation and clear goals to preserve regional peace.

The Taiwan Relations Act, which serves as a guideline for US interactions with Taiwan in the absence of official diplomatic ties, states that Washington “shall provide Taiwan with arms of a defensive character.”