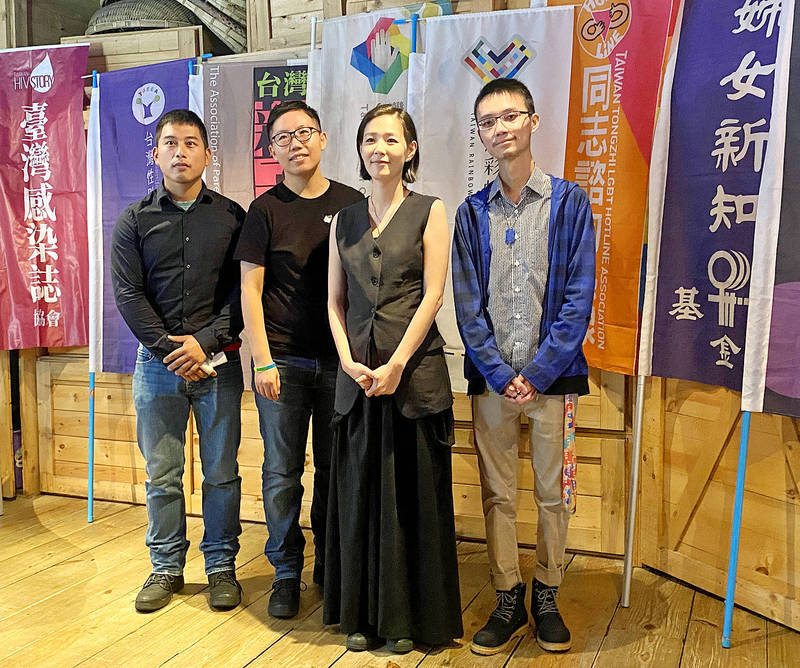 The 18th annual Taiwan LGBT Pride parade is to take place on Oct. 31, with the second-ever Taiwan Trans March to be held the evening before, organizers said yesterday.

Organized by the Taiwan Rainbow Civil Action Association with support from a dozen other groups, this year’s pride parade is themed “Beauty, My Own Way,” organizers told a news conference in Taipei.

Singer-songwriter Chiao An-pu （焦安溥）, formerly known as Deserts Chang （張懸）, is to once again serve as the event’s “rainbow ambassador,” they said.

Chiao was one of three “rainbow ambassadors” at the 2011 event.

However, due to the COVID-19 pandemic, there might be fewer participants this year, as people who are abroad might be unable to travel to Taiwan, Shao said.

Online orders for official merchandise for this year’s parade would be accepted from Thursday to Oct. 20, organizers said.

Group registration for the parade would open online at 10am today, they said.

Although it has been more than a year since the passage of the Act for Implementation of Judicial Yuan Interpretation No. 748 （司法院釋字第748號解釋施行法）, which legalized same-sex marriage, supporting government policies are needed for the law to be realized in daily life, and progress must be made in terms of educating the public, Shao said.

Shao said that the controversy sparked by the children’s picture book King & King shows that “gender equity education, whether in our lives or on campuses, still faces many attacks.”

The Ministry of Education this year gave some first graders the Mandarin edition of the book by Linda de Haan and Stern Nijland as part of a reading promotion program.

However, some groups objected, as the book depicts two princes falling in love and getting married, while other groups defended it.

Many people in Taiwan still do not understand what transgender means, said Tsai, who is the coordinator of the march.

Transgender people face various challenges on a daily basis, which is why the Taiwan Tongzhi （LGBTQ） Hotline Association has decided to hold the event for a second time, she said.