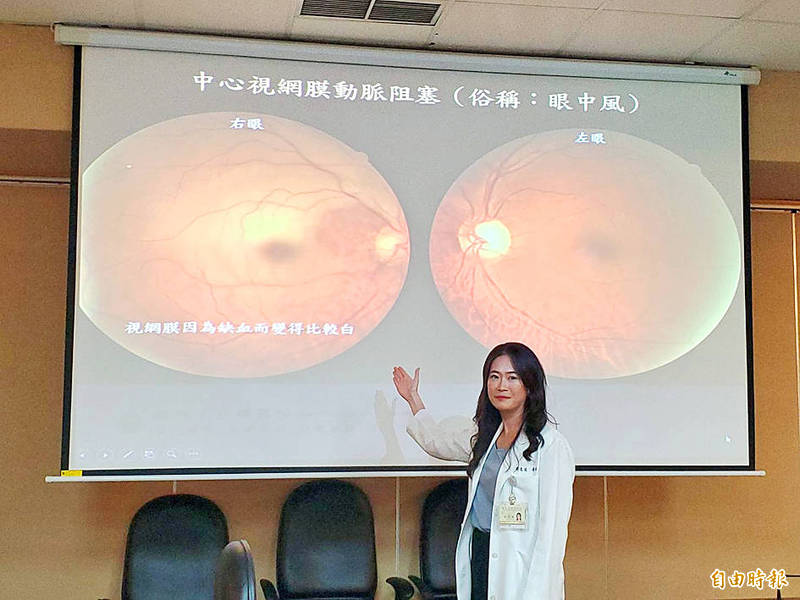 Neuro-ophthalmologist Cheng Hui-chen presents the results of research into the correlation between air pollution and the occurrence of eye strokes during a news conference in Taipei yesterday. Photo: Lin Hui-chin, Taipei Times

FINDINGS: A rise in air pollution of one part per billion for a week can cause people to be 1.1 times more likely to have an eye stroke, which could result in major loss of vision

Exposure to air pollution can cause a person to be 2.16 times more likely to experience eye strokes, which can cause vision loss, researchers in Taipei said yesterday.

An increase of air pollution over a one-week period by just one part per billion can cause those exposed to be 1.1 times more likely to experience an eye stroke, the team said.

Diabetics, people with high blood pressure, high cholesterol or other pre-existing conditions face an even higher risk: They are 1.4 to 2.16 times as likely to have an eye stroke, the team said.

Neuro-ophthalmologist Cheng Hui-chen （鄭惠禎） said that eye strokes occur when there is insufficient blood flow to the tissues in the front part of the optic nerve, and while such strokes are sudden and painless, they can result in serious vision loss.

One patient she treated, a 67-year-old man, had lost the sight in his right eye, due to a lack of blood flow to the eye, she said.

Doctors already know about the link between air pollution and an increased risk of conjunctivitis, xerophthalmia （abnormal drying of the eye）, retinal-vein occlusion and other conditions, but the research team hoped to expand upon those findings with their project, she said.

In the study, the team looked at 93 patients who had experienced eye strokes between 2001 and 2013, and compared their details with the data from 603 weather sensors and 78 air-quality sensors near the patients’ homes, she said.

The team found that an increase in air pollutants such as nitrogen dioxide, sulfur dioxide and fine particulate matter of 2.5 micrometers （PM2.5） or PM10 correlated with a significant increase in the rate of eye strokes, she said.

Air pollutants can enter the optical veins through the respiratory tract, passing from the veins in the lungs to those in the eyes through the circulatory system, and causing blockages when they reach the eyes, she said.

One way to reduce the risk of eye strokes is to reduce exposure to air pollution by using public transportation instead of riding scooters, she said.

The elderly and those with preexisting conditions should also wear masks on days when pollution levels are high, she said.