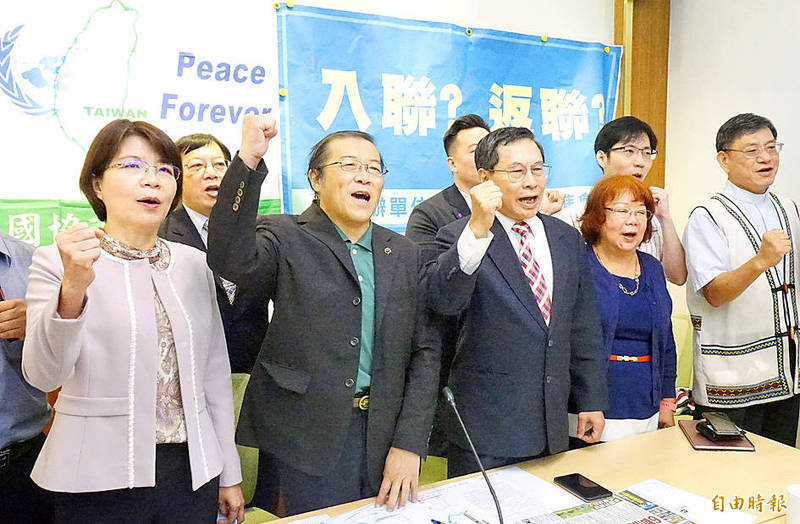 IDENTITY: The time is right to press on with a referendum, as the nation has heightened visibility and support in the global community, the Taiwan United Nations Alliance said

The Taiwan United Nations Alliance yesterday said that it is considering launching a petition for a referendum proposal to have the nation join the UN under the name “Taiwan.”

Alliance chairman Twu Shiing-jer （涂醒哲） was joined at a news conference in Taipei by Democratic Progressive Party （DPP） Legislator Huang Hsiu-fang （黃秀芳） and leaders of the Presbyterian Church in Taiwan and civic organizations.

They said that it is the right time for a petition because Taiwan’s visibility on the world stage has increased, as it has been praised for its success in containing its COVID-19 outbreak and for helping other countries by sharing its medical expertise and donating masks.

The alliance has adopted the slogan “Taiwan for the UN, the UN for Taiwan” and is communicating with other civic organizations to hold a referendum next year to show the world that joining the UN is the consensus among a vast majority of Taiwanese, Twu said.

Taiwan’s profile has been heightened and it has been receiving support from the international community, Huang said, citing visits by senior officials from Japan and the US in the past few months, which he said put Taiwan in the international media limelight.

“It is the wish of all Taiwanese to join the UN under the name ‘Taiwan,’” Huang said, urging opposition parties to set aside their political differences to “unite in one voice” for the world to hear the nation’s aspiration to become a member of the UN.

The majority of people agree to using the name “Taiwan,” the alliance said.

“In a recent public survey released this month by the Taiwan Thinktank, 86 percent of people chose to identify as Taiwanese when only one choice could be selected, while only 2 percent identified as Chinese,” it said in a release.

“It is clear that for the vast majority of people, Taiwan is for Taiwanese, and we are not a province of China. The voices of society are saying that Taiwan and China are separate countries across the Taiwan Strait,” it said.

Twu also denounced the Chinese Nationalist Party （KMT） and then-president Ma Ying-jeou （馬英九） for launching a referendum proposal in 2008 to have the nation rejoin the UN and other international organizations under the name Republic of China （ROC）.

“It was a way for the KMT and Ma to collude with the Chinese Communist Party to block Taiwanese’s path toward forming an independent nation,” he said.

“The KMT promoting the ROC to join the UN was a betrayal of all people in Taiwan, and ran contrary to prevailing public sentiment,” the alliance said.

At the time, the DPP had proposed a referendum to join the UN as “Taiwan,” while the KMT’s proposal sought to rejoin under the name “ROC” or any other “practical” title that would uphold the nation’s dignity. Neither proposal was passed, as voter turnout failed to reach 50 percent.