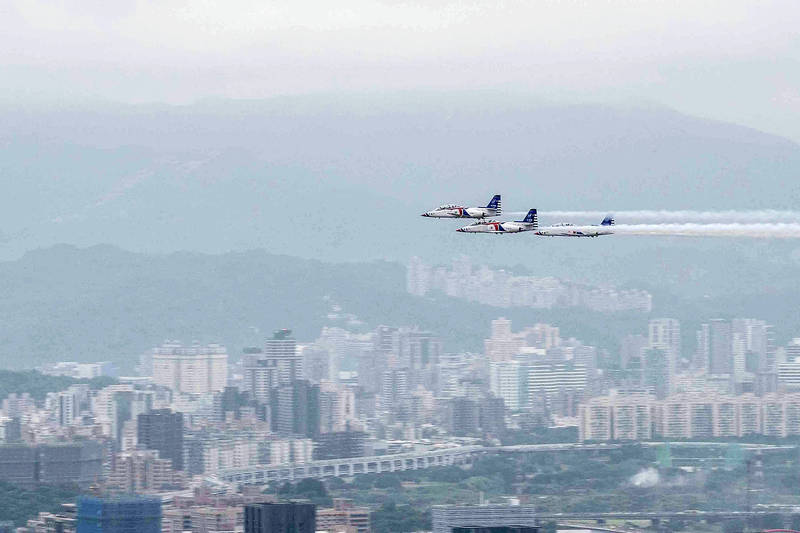 Three AT-3 training jets fly above Taipei yesterday in a rehearsal for Double Ten National Day celebrations. Photo courtesy of the Military News Agency via CNA

PRACTICE MAKES PERFECT: The Ministry of National Defense denied rumors that jets and helicopters flying over the capital were part of a Chinese invasion force

Jets and helicopters flying over Taipei yesterday were no cause for alarm, as they were part of Double Ten National Day preparations, President Tsai Ing-wen （蔡英文） said, adding that more rehearsals are set for Tuesday next week, Oct. 6 and Oct. 8.

“This morning, the alarm clock for Taipei sounded somewhat different. This was the sound of [Taiwan’s] military aircraft flying over,” Tsai wrote on Facebook in Chinese.

One UH-60M Black Hawk, two CH-47 Chinook helicopters, three F-16Vs and three AT-3 training jets flew over Taipei as part of rehearsals for the Oct. 10 celebrations.

Aside from those participating in the rehearsals, all of the nation’s military units are on duty at their respective posts and performing their duties to defend Taiwan, Tsai wrote.

She urged people to encourage military personnel should they encounter them in public.

The Ministry of National Defense yesterday denied rumors that the jets were advanced units from the Chinese People’s Liberation Army heralding an imminent invasion, adding that over the next few days there would be more such air traffic over Taipei.

National Day Celebration Preparation Committee Secretary-General Chen Tsung-yen （陳宗彥）, who is also deputy minister of the interior, said that yesterday’s rehearsals were conducted using only three out of the standard six aircraft, as would rehearsals on Sunday.

Rehearsals on Tuesday next week and on Oct. 6 would be done in full formation with six aircraft, Chen said.

Early morning was selected to conduct the rehearsals to minimize the impact on the public, he said, adding that organizations had been alerted of the exercises.

A parade of vehicles is to be moved to the second half of this year’s national day celebrations and be replaced by performances that embody the day’s theme, “Democratic Taiwan, Advancing with Confidence,” Chen said.

The military police are to rehearse from 12:50am to 3:33am until Oct. 6, Chen said, adding that celebrations this year are to include equipment used for COVID-19 prevention.

The Ministry of Foreign Affairs yesterday released video clips — a full version of more than 5 minutes and a shorter version of 30 seconds — to celebrate Double Ten National Day.

Titled Working Together to Lead Taiwan Forward, the videos feature information about the nation’s achievements containing COVID-19, Taiwan offering medical aid to other countries and global support for the nation’s democracy, as well as its support for gender equality.

Czech Senate President Milos Vystrcil’s statement, “I am Taiwanese,” which he made during a speech at the Legislative Yuan in Taipei on Sept. 1, is highlighted in the video.

The video can be viewed at https://youtu.be/r3DbGxC0EM8.

The Chinese and English-language slogans for this year’s Double Ten National Day celebrations are displayed in a video released by the Ministry of Foreign Affairs yesterday. Photo copied by Lu Yi-hsuan, Taipei Times