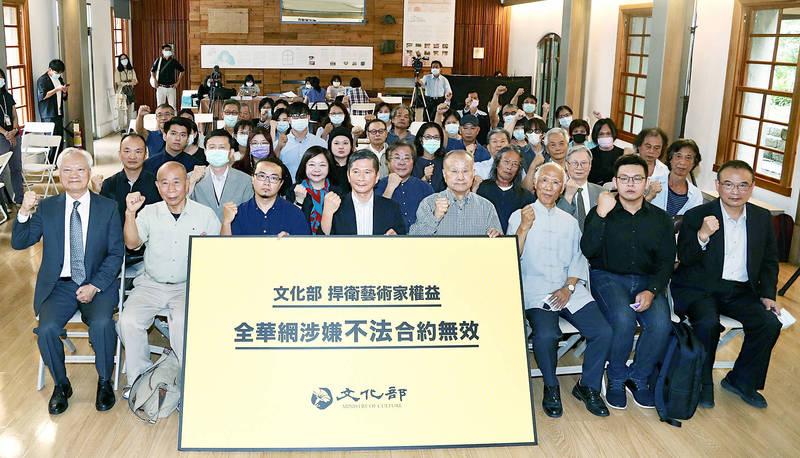 ‘INDENTURED SERVICE CONTRACT’: The Ministry of Culture has arranged legal representation for the artists and plans to file a class-action lawsuit against the firm

The Ministry of Culture yesterday said that it would assist artists with litigation against an online art gallery and distributor, Global Art Net, which used contracts to allegedly bilk the artists out of commissions on all of their sales.

Ink painter Liu Kuo-sung （劉國松） first brought the issue to light four years ago when he discovered that Global Art Net was selling reprints of his work, the ministry told a news conference.

“I was going to take them to court, but they produced a contract, that I signed, which authorized them to sell all my work — current, past and future — and take 40 percent of the profit,” Liu said.

Likening the contract to an “indentured service contract,” Liu claimed that more than 500 artists had signed contracts with the Web site, which demands a 40 percent commission from sales of their work.

Investigations have shown that Global Art Net owner Lin Chu-nan （林株楠） might have begun defrauding artists as early as 2011.

Minister of Culture Lee Yung-te （李永得） yesterday extended an apology to all of the alleged victims, saying that the ministry learned about the company’s actions too late and could not deliver justice before now.

The ministry has asked prosecutors to urge the court to expedite a review of the case.

The ministry has arranged for the artists to have legal representation and plans to file a class-action lawsuit against Global Art Net, in the hope of annulling the contracts by declaring them illegal.

The case is “absurd,” Lee said.

“If we can’t defend and protect our artists’ rights, what right do we have to talk about the development of national arts and culture?” he added.