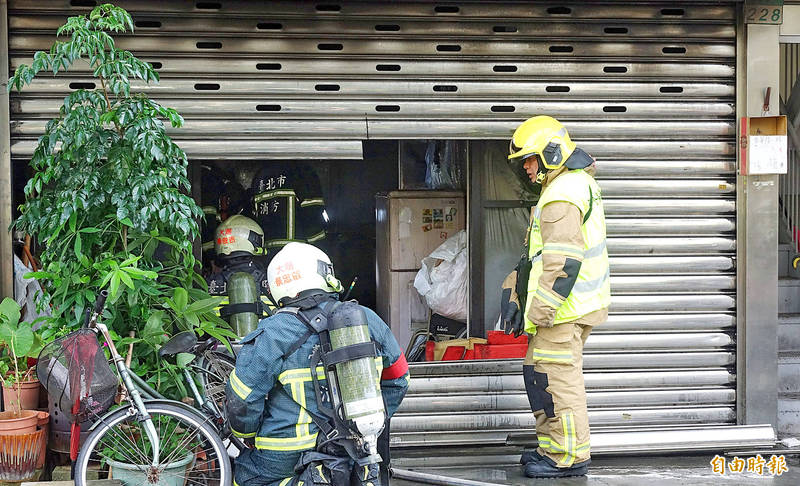 Firefighters look through the cut-open steel shutter of an unregistered long-term care facility in Taipei’s Neihu District on Tuesday after putting out a fire that caused the death of three residents. Photo: Chang Chia-ming, Taipei Times

FATAL FIRE: The health department is trying to contact the inspector who visited the site of the illegal nursing home to ask why they did not advise follow-up checks

The Taipei City Government yesterday said that a health department inspector last year had visited the site of a long-term care facility in Neihu District （內湖） after receiving a report questioning its status. A fire broke out at the facility on Tuesday afternoon, killing three people.

The Taipei Fire Department said that it received a report about a fire on the first floor of a four-story residential building on Kangning Road Sec. 1 at 2:38pm on Tuesday, firefighters arrived at 2:43pm and the fire was put out by 3:07pm.

The firefighters found three men in beds and rushed them to hospital for emergency treatment. Two of the men died on Tuesday and the third man died yesterday morning.

The city’s departments of social welfare and health issued a joint news release late on Tuesday evening, saying that the long-term care facility was operated by a woman surnamed Ting （丁） and that it was not legally registered.

Ting, who was not in the house when the fire broke out, was taken by police for questioning on Tuesday evening.

Ting allegedly breached the Long-Term Care Services Act （長期照顧服務法） by operating an unregistered facility, as well as the Senior Citizens Welfare Act （老人福利法） for leaving elderly people who do not have the ability to care for themselves in an environment that is prone to danger or injuries.

Taipei Deputy Mayor Vivian Huang （黃珊珊） yesterday said that the warden of Ziyun Borough （紫雲）, where the house is located, had called the city government’s 1999 hotline in August and September last year to ask if it was a legal facility.

A health department inspector, accompanied by the borough warden and police, went to the reported address on Sept. 17 last year.

The property was locked and when no one responded to their call and there did not appear to be any imminent danger, it was decided that police would continue to monitor the place for any suspected illegal behavior, Huang said.

The warden did not further report the facility as there were no complaints about the facility causing a disturbance to the community, and the health inspector did not mark the case for follow-up checks, she said.

“The person at fault is the one who broke the law,” Huang said, adding that although the inspection on the reported case was not effective, they should not be severely criticized.

The health department is trying to contact the investigator, who was a contracted personnel, to clarify why there was no follow-up on the case.