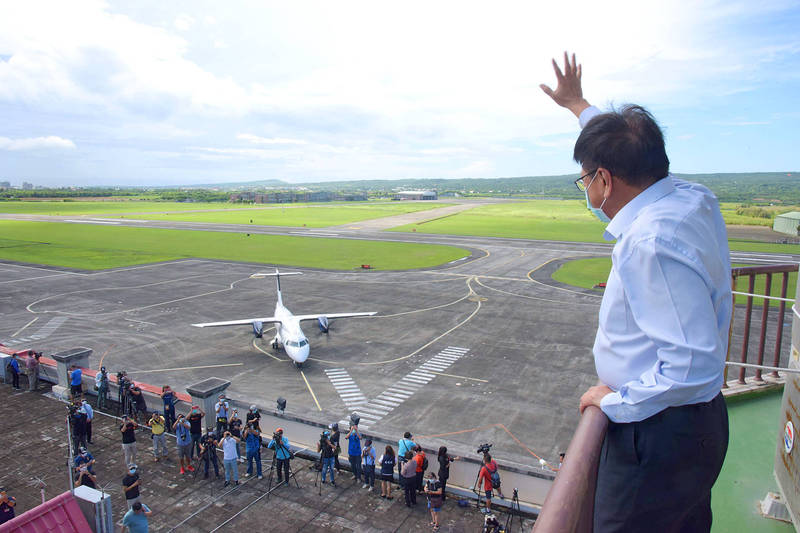 Pingtung County Commissioner Pan Meng-an waves to the crew of a Platinum Skies passenger jet at Hengchun Airport on Monday as the aircraft arrives on a trial flight from Manila. Photo courtesy of Pingtung County Government via CNA

EFFICIENCY: The rules for Philippine arrivals were revised after 17.6% of arrivals with symptoms tested positive, compared with 0.7% of those with no symptoms

Starting today, Chinese spouses who hold a reunion permit can apply to enter Taiwan and travelers without symptoms from the Philippines do not need to be tested for COVID-19 upon arrival, but are to be tested after a 14-day quarantine, the Central Epidemic Command Center （CECC） said yesterday.

Minister of Health and Welfare Chen Shih-chung （陳時中）, who heads the center, said that from today, Chinese who are married to a Taiwanese citizen and hold a reunion permit can apply to the National Immigration Agency for entry into Taiwan.

Chinese who are married to a foreign national and hold an accompanied reunion permit and their minor children can also apply, but all travelers that arrive in Taiwan would need to undergo a 14-day home quarantine, he said.

Since July 26, all arrivals from the Philippines have been tested for COVID-19 at the airport, Chen Shih-chung said.

Of the 1,238 arrivals tested as of Sunday, 17.6 percent of those with symptoms returned positive, which was significantly higher than the 0.7 percent of arrivals without symptoms, Chen Shih-chung said, adding that this led the advisory specialist panel to modify the policy.

Foreign arrivals who do not hold an Alien Resident Certificate would still need to provide a negative reverse transcription-polymerase chain reaction test result obtained within three days of boarding their flight and pay NT$1,500 per day for their stay at a centralized quarantine facility, Chen Shih-chung said.

The center received new reports of travelers from Taiwan testing positive after arriving in other countries: 18 travelers to the Philippines and one traveler to Japan, Chen Shih-chung said, adding that contact tracing was promptly launched.

Eleven people who took the Sept. 11 flight to the Philippines tested positive, as well as two other cases reported on Wednesday last week, Chen Shih-chung said.

“Having 13 out of 78 passengers on a flight from Taiwan test positive upon their arrival — an infection transmission rate of 16.7 percent — is abnormally high,” he said, adding that a Sept. 10 flight to the Philippines had four cases.

Centers for Disease Control （CDC） Deputy Director-General Chuang Jen-hsiang （莊人祥）, who is also CECC spokesman, said that the transmission rate for travelers from Taiwan arriving in the Philippines is 0.48 percent — 0.39 percent last month and 2 percent this month — which is higher than the rate for arrivals from Taiwan in other countries, such as 0.005 percent in China and 0.055 percent in Japan.

The CECC is waiting to receive case details from the Philippine authorities, Chuang added.

The newly infected arrivals in the Philippines are eight men and 10 women, aged 20 to 60, who departed Taiwan between Aug. 19 and Sep. 11, Chen Shih-chung said, adding that 372 close contacts in Taiwan have been identified and 202 people tested were all negative.

The newly infected arrival in Japan is a Japanese man in his 50s who arrived in Taiwan on Aug. 29, was quarantined until Sept. 12 and tested positive on an antigen test when he returned to Japan on Monday last week, although the man’s PCR test results on Sunday and Monday returned negative, and a close contact in Taiwan tested negative, Chen Shih-chung said.