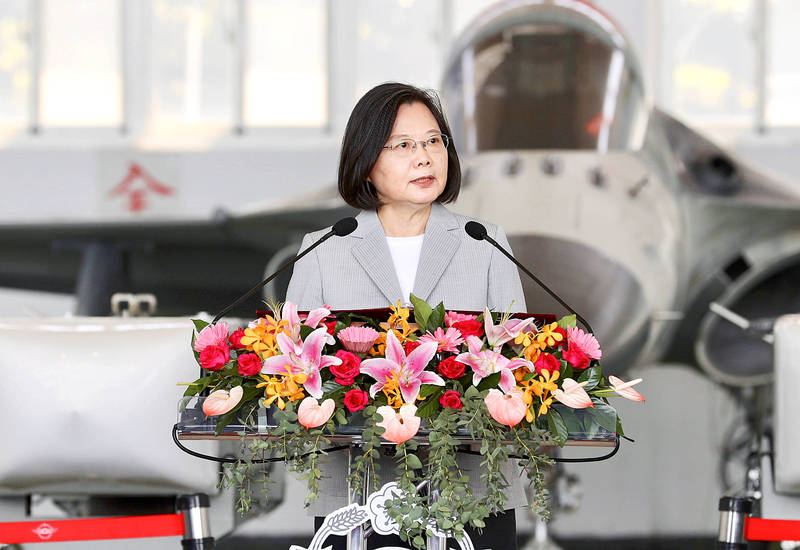 PENGHU INSPECTION: Taiwan cannot let its enemies strut around in its airspace, Tsai said, one day after a Chinese spokesman denied a median line exists in the Taiwan Strait

Following China’s assertion on Monday that there is no “median line” in the Taiwan Strait, President Tsai Ing-wen （蔡英文） yesterday pledged to defend the nation’s airspace during a visit to an air force base in Penghu, saying that Taiwan cannot allow others to flex their military muscle in its territorial airspace.

Tsai praised the “heroic performance” of the pilots of the Indigenous Defense Fighters who have been intercepting Chinese People’s Liberation Army Air Force planes in recent days.

“I have a lot of confidence in you. As soldiers of the Republic of China [ROC], how could we let enemies strut around in our own airspace?” she said, implicitly rejecting Chinese Ministry of Foreign Affairs spokesman Wang Wenbin’s （汪文斌） comment on Monday that the median line of the Taiwan Strait does not exist, because ‘Taiwan is an inalienable part of China.”

“I’m aware that facing the provocative behavior of the communist planes that have encircled the island and damaged regional peace in recent days. Your duty at the front line of the airspace in Penghu must be even heavier,” Tsai told the members of the Tien Chu （天駒, Heavenly Colt） unit, who are stationed at Penghu Airport from April to September every year.

“Our men and women in uniform have the will & ability to defend #Taiwan & are not intimidated by #PRC intrusions in our airspace. We are dedicated to maintaining peace & stability in the region,” she later wrote in English on Twitter.

As of yesterday, a total of 43 Chinese air force planes have flown into Taiwan’s air defense identification zone since Wednesday last week, with some crossing over the median line of the Strait on Friday and Saturday, the Ministry of National Defense’s Web site showed.

“The CCP [Chinese Communist Party] claims there’s no median line of the #Taiwan Strait after #PLA [People’s Liberation Army] warplanes crossed it repeatedly. I call on the international community to condemn the CCP for its dangerous & provocative words & deeds threatening peace & the status quo. #China must back off!” Minister of Foreign Affairs Joseph Wu （吳釗燮） wrote on Twitter yesterday.

His comment followed a press release from the Ministry of Foreign Affairs in Taipei on Monday that said Wang’s statement would sabotage the cross-strait “status quo,” just as Beijing had ruined Hong Kong’s “one country, two systems” framework by imposing a National Security Law on the territory.

It called on Beijing to stop its blatant expansionism and urged the international community to condemn Beijing’s behavior.

In rejecting the median line, Beijing shows no regard for regional security, said Su Tzu-yun （蘇紫雲）, director of the Division of National Defense Resources and Industries at the Institute for National Defense and Security Research.

The median line, established by the US in the 1950s, created a buffer zone that has been tacitly recognized by Beijing for decades, he said.

The world must be told that China is unilaterally changing the cross-strait “status quo,” Su said.

He said that he considered the possibility of a cross-strait conflict to be low, as China provoking a military conflict would push Taiwan closer to other democratic nations.

Meanwhile, US Representative Ted Yoho on Monday said both Taiwan and the US need to be ready to confront the PLA.

“#Taiwan continues to prepare for the very real possibility of a Chinese PLA invasion by building up its defense posture. The US must be ready to come to the aid of our democratic partner by supporting the #TaiwanInvasionPreventionAct,” Yoho wrote on Twitter, referring to a bill that he introduced in July that would establish a limited authorization for a US president to use military force to protect Taiwan against an armed attack.

Indigenous Defense Fighters and missiles are displayed in a hangar at Penghu Airport in Magong City, Penghu County, yesterday during an inspection by President Tsai Ing-wen. Photo: CNA