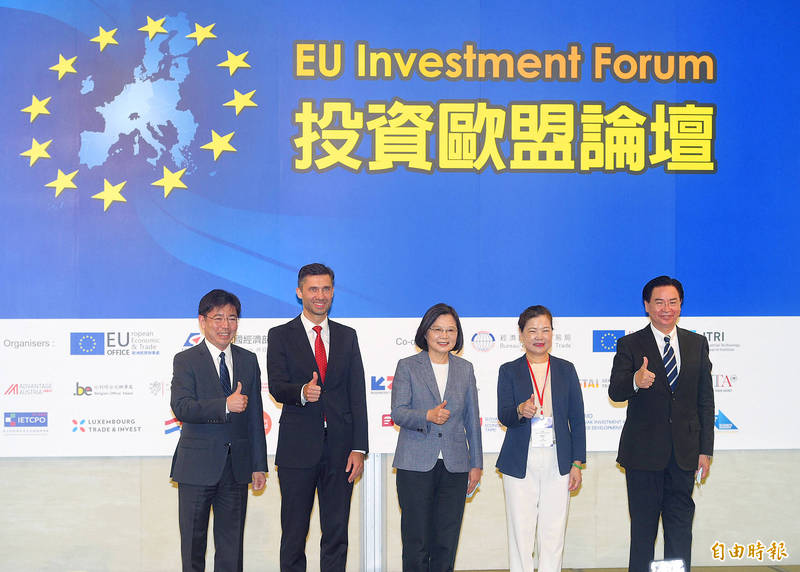 Citing “common values” and “complementary strengths,” Tsai said it was time for Taiwan and Europe to “take it forward” to an “even stronger partnership.”

“By negotiating a bilateral investment agreement, a solid existing foundation can become a cornerstone of future success,” Tsai told the forum, held at the Taipei International Convention Center, which attracted 1,400 registrants.

“A BIA is the key to this success and will help us all thrive in the digital age,” she said. “Where others see volatility, we see the opportunity for prosperity and building global partnerships.”

Taiwan is prepared to become a top partner for the EU in several sectors, she added.

In his address to the opening ceremony, European Economic and Trade Office in Taiwan Director Filip Grzegorzewski said the COVID-19 pandemic has exposed the vulnerabilities of world markets, and the time has come for Taiwan and the EU to “change ... before we have to,” to “work together” and “embrace new opportunities.”

“The EU and Taiwan speak the common language of human rights, democracy and rule of law. We both share the values of an open, transparent and fair international trading system; we both aspire to create a sustainable, green and digital society,” Grzegorzewski said.

The one-day forum included an investment fair, where Taiwanese investors could speak with EU representatives.

Alain Berder, head of the economic department at the French Office in Taipei, said that Taiwanese companies are missing out on investment opportunities.

“Twenty percent of FDI [foreign direct investment] coming into Taiwan is from the EU, making the EU the biggest investor in Taiwan, but only 1.6 percent of Taiwan’s FDI goes to Europe, while 56 percent goes to China,” he said.

There is still “a lack of familiarity” to be overcome between Taiwanese and European businesses, although that is changing, Berder said, citing La French Tech Taiwan, which wants to connect the start-up ecosystems of France and Taiwan.

Belgian Office Taipei Director Frederic Verheyden said that Belgium’s position at the heart of Europe geographically and politically makes it an attractive destination for Taiwanese investments.

“It’s a very logical place to start doing business with the EU,” Verheyden said. “We also have very specific strengths. You start exploring Belgium through its beer and its chocolates. On the more technical side we have logistics, sciences, biotechnology, pharma and nanotechnology.”

German Trade and Invest Director for Taiwan and the Philippines Alexander Hirschle said that there is a huge opportunity for Taiwanese companies, “with their strength in the electronics sector,” to cooperate with German companies in segments such as self-driving and e-mobility.”

“Maybe one day the Taiwanese companies will build up their own know-how and supply chain in this area and export to Europe,” Hirschle said. “It is too early, but maybe three to five years from now.”

“I just talked to a gentleman from the automotive industry. They are responsible for components manufacturing and we see that as an opportunity because Hungarian automotive companies are good at integrating these systems,” Fasi said.