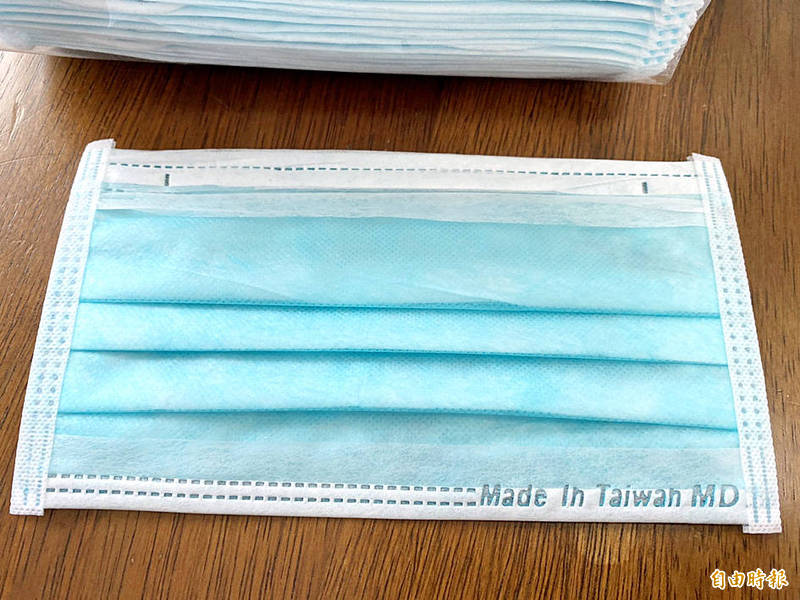 A mask embossed with the “ Made In Taiwan MD” logo is pictured on Friday. Photo: Chang Tsung-chiu, Taipei Times

The Central Epidemic Command Center （CECC） yesterday reiterated that medical-grade masks bearing the debossed markings “MD” and “Made In Taiwan” can only be purchased through the government’s mask rationing system.

Asked about an Internet user posting an image of such a mask they claimed to have bought on an online retail platform, Centers for Disease Control Deputy Director-General Chuang Jen-hsiang Chuang Jen-hsiang （莊人祥）, who is also the CECC’s spokesman, said that the CECC would look into the matter to clarify whether the mask is a genuine product sold before the government ordered the requisition of such masks or whether it is a counterfeit.

Asked if local medical-grade mask manufacturers that are not in the “national team” of suppliers that provide masks for the rationing system can also produce and sell masks bearing the markings, Chuang said they cannot, as the government has since Thursday been requisitioning all such masks.

Separately yesterday, the CECC reported two imported cases of COVID-19, bringing the number of confirmed cases in Taiwan to 509.

Case No. 508 is a Taiwanese in his 20s who traveled to Indonesia for work in June, Chuang said.

He developed a fever and lost his sense of smell on Thursday, but did not see a doctor and returned to Taiwan on Saturday, Chuang said, adding that he was tested for COVID-19 at the airport because he still had a fever and was isolated at a hospital.

He tested positive yesterday, and 14 passengers who sat near him on the flight to Taiwan have been put under home isolation, Chuang said.

Case No. 509 is a Taiwanese in his 30s who traveled to Myanmar for business in April and returned on Thursday, he said.

The man, who did not show any symptoms, was staying at a quarantine hotel when another passenger （case No. 505） who sat one row behind him on the flight back to Taiwan was confirmed to have COVID-19, prompting authorities to place case No. 509 under home isolation.

He developed a cough on Thursday night and was taken to a hospital the next day, when he also developed a fever and lost his sense of smell, Chuang said, adding that he tested positive yesterday.

Cases 509 and 505 are not acquainted, and only sat close to each other on the plane, he said.

The duties of people under home quarantine and home isolation are similar, Chuang said.