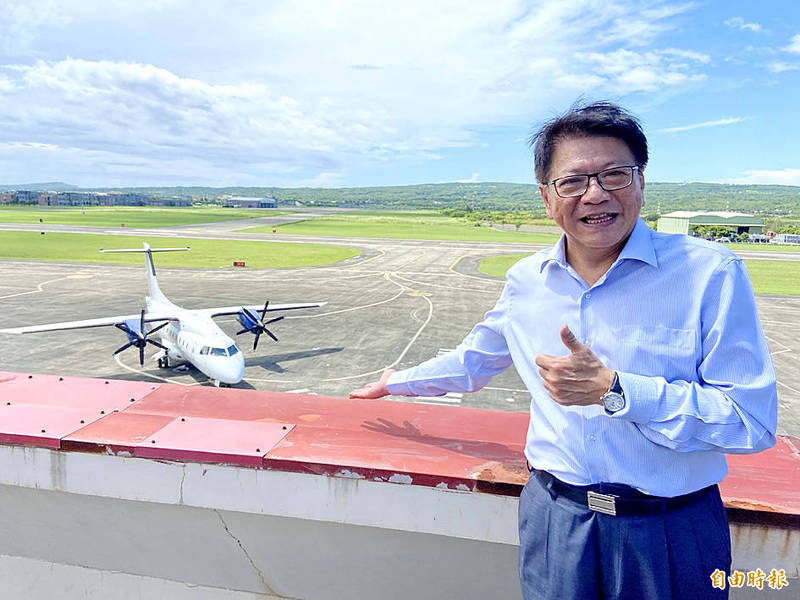 A charter flight from the Philippines is seen behind Pingtung County Commissioner Pan Men-an on the runway at Hengchun Airport yesterday. Photo: Tsai Tsung-hsien, Taipei Times

A Philippine charter flight arrived at Pingtung County’s Hengchun Airport yesterday morning as part of a trial run on resuming passenger operations at the facility, the first passenger jet to land at the airport since 2014.

The Dornier 328-110 turboprop from Platinum Skies Aviation departed Manila’s Ninoy Aquino International Airport and arrived at Hengchun at 10:39am.

As part of the government’s COVID-19 prevention efforts, the pilots were asked to stay on the plane, and keep the cabin doors closed and the engines running during their 50-minute stopover.

Pingtung County Commissioner Pan Men-an （潘孟安） was at the airport to watch the plane arrive and greet the pilots, albeit from a distance.

“This is a historic moment and a milestone,” Pan said.

The test flight had been scheduled for June, but was postponed because of the pandemic, he said.

“We hope the airline would secure the aviation rights to offer charter flight services, and that more travelers from neighboring countries could arrive via charter flights. In the long run, we plan to seek funding to revamp the airport’s facilities to ensure that it can operate sustainably,” Pan said.

The airport was built mainly to facilitate tours to Kenting National Park. It opened in 2004, but only served passengers on domestic flights between Taipei and Hengchun, and by 2007, UNI Air （立榮航空） was the only operator.

The government had long debated closing the airport, but in March 2017, the Executive Yuan agreed to give the county government two more years to keep it open, during which international charter flights would be allowed as part of trial operations.

No carriers applied to offer charters during that time, but in March last year, the Executive Yuan gave the county two more years.

The county had held talks with more than 40 airlines, Pan said.

In other news, the Mainland Affairs Council has denied the Ministry of Transportation and Communications’ requests to approve six more Chinese airports for cross-strait cargo services amid the pandemic, citing Beijing’s frequent dispatch of military aircraft across the Taiwan Strait.