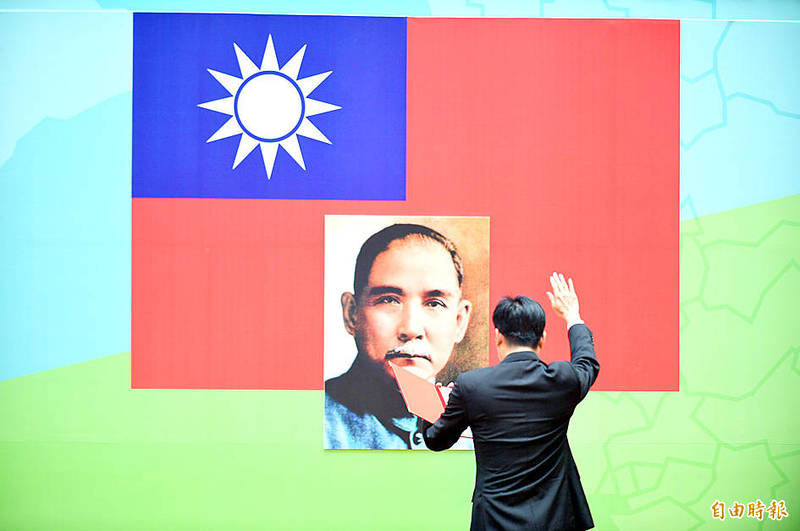 Kaohsiung Mayor Chen Chi-mai raises his right hand as he takes his oath of office in front of a portrait of Sun Yat-sen during his swearing-in ceremony on Aug. 24. Photo: Chang Chung-yi, Taipei Times

COMPLAINT: A KMT colleague was paranoid with his warning that removing pictures of Sun Yat-sen would end with removing the flag and the ROC’s name, Fan Yun said

A proposal to eliminate a requirement that public officials and military personnel take their oaths of office in front of a portrait of Sun Yat-sen （孫逸仙） was aimed at “doing away with authoritarianism,” Democratic Progressive Party （DPP） Legislator Fan Yun （范雲） said yesterday.

Article 6 of the National Emblem and National Flag of the Republic of China Act （中華民國國徽國旗法） stipulates that government agencies, schools and the military should display the national flag above an image of Sun at the front and center of any room where people congregate.

Fan and DPP Legislator Chuang Jui-hsiung （莊瑞雄） have proposed amending the act to eliminate the requirement that elected officials and others face a portrait of Sun while being sworn in.

“The DPP thinks that just doing away with Chinese history is not enough, now they want to eliminate all of the Republic of China’s [ROC] founding fathers,” he wrote.

The DPP wants to remove portraits of Sun under the auspices of “transitional justice,” but tomorrow it could use the same excuse to remove the national flag, he said.

Next, the nation’s name will be in danger, Chen added.

Fan said Chen is too paranoid.

It is democratic to propose that people should no longer have to swear an oath to the portrait of a national founder, Fan said, noting that many nations do not have such a requirement, including the US, France, Germany, Italy, the Czech Republic and South Korea.

European prime ministers take their oaths facing their legislatures, while the US president faces the chief justice of the US Supreme Court, who is administering the oath of office, she said, adding that only in Taiwan must officials face an authoritarian figure.

Taiwan must move further toward democracy and away from authoritarianism, and should do so by eliminating the idolization of an authoritarian figure, and removing such portraits is part of the process of democratization, she added.

Chuang said that requiring the installment of a political leader’s portrait is unnecessary in a democracy, and there is no need to “worship a totem.”

The amendment is aimed at liberating people from the authoritarian-era mindset, normalizing the nation, advancing democracy and allowing the public to avoid having to worship long-gone idols, he said.

“Taiwan is now a democracy. The KMT should drop its authoritarian mindset and feudalist thinking — using the law to mandate the hanging portraits of a founding father and swearing an oath to them is too backward,” he added.