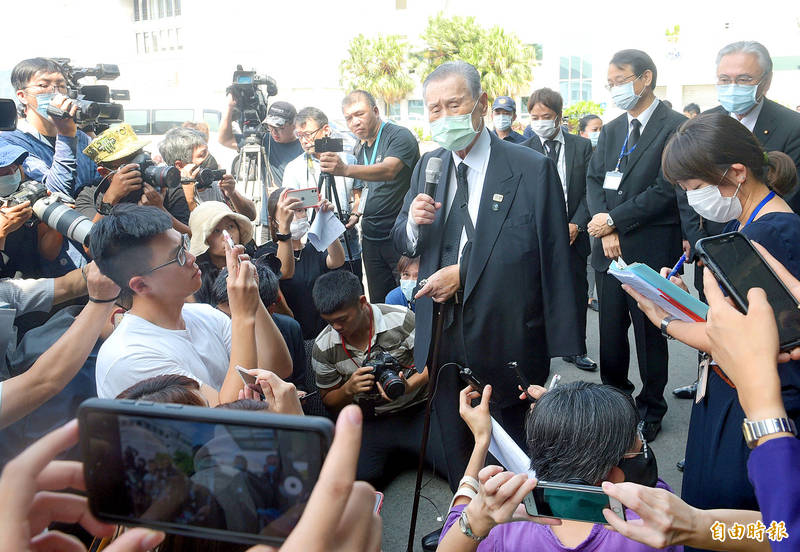 AN EXAMPLE: After attending a memorial service for Lee Teng-hui, Mori said the former president’s career reflected the importance of peace and democracy

Mori made the remarks at a news conference in front of the EVA Sky Jet Center at Taipei International Airport （Songshan airport）, after leading a delegation to attend the official memorial service for former president Lee Teng-hui （李登輝） in New Taipei City’s Tamsui District （淡水）.

This was Mori’s second trip to mourn Lee; his last was on Aug. 9.

Although he walked with a crutch, Mori, 83, chose to stand right in front of reporters, instead of at a distance as was planned.

Asked about this trip to Taiwan and his advice for new Japanese Prime Minister Yoshihide Suga regarding Taiwan policy, Mori said that he represented the Japanese government in paying tribute to Lee.

“With Lee’s passing, our era has ended,” as he himself had also retired from politics, Mori said through an interpreter.

The global situation will become more complicated, he said, adding that countries are facing their own problems, such as the UK leaving the EU, or other disputes related to the economy, but all conflicts should be resolved through peaceful discussion.

The era when people used military force to resolve conflict or suppress dissent, such as in Lee’s and his own times, has ended, he said.

Young people should seek to collaborate, whether through music, sports or economic cooperation, said Mori, who is president of the Tokyo Organizing Committee of the Olympic and Paralympic Games.

Lee’s career reflected the importance of peace, freedom and democracy, he added.

Asked if Taiwan and Japan might develop security cooperation in the face of China’s military intimidation, Mori said that security issues do not only exist between Japan and Taiwan.

As the world is in a state of tension, military confrontation is no longer workable, he said.

The Olympic Games can only be held when the world is peaceful, he said, adding that he hopes vaccines for COVID-19 will be available soon and the Games will be staged next summer as scheduled.

During his meeting with President Tsai Ing-wen （蔡英文） at the Presidential Office Building on Friday, Mori said that this might be his last trip to Taiwan due to his age.

Mori said that before he departed for Taiwan, Suga called him on Thursday and expressed the hope of talking with Tsai over the telephone if there was an opportunity.

The interpreter did not translate that part into Chinese.

Asked if a telephone call between Tsai and Suga would be arranged, the Japan-Taiwan Exchange Association and Taiwan-Japan Relations Association said that there is no plan for such a call.