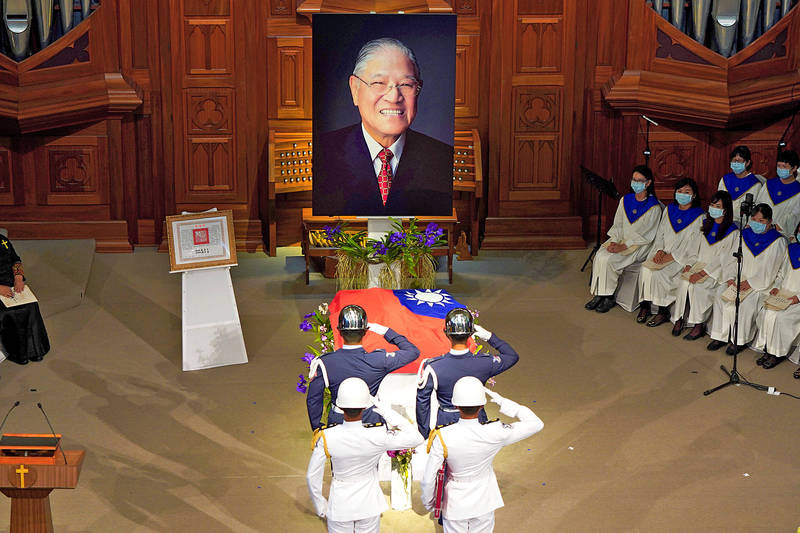 EPITOME OF TAIWAN: Shinzo Abe and the Dalai Lama were both represented at the memorial, with the latter saying he admired Lee for ‘protecting Taiwan’s democracy’

Lee, an agricultural economist and politician who devoted his career to building democracy in Taiwan through direct elections and helping create a Taiwanese identity distinct from that of China, passed away on July 30 aged 97.

The main service, held yesterday morning at the chapel of Aletheia University in New Taipei City’s Tamsui District （淡水）, was attended by nearly 800 people, including government officials, Lee’s relatives and friends, members of the Presbyterian Church and representatives of foreign governments, including former Japanese prime minister Yoshiro Mori and a delegation led by US Undersecretary of State for Economic Growth, Energy and the Environment Keith Krach.

They wore masks and sat spaced out in pews.

The memorial was also held at two other venues — an auditorium and concert hall at nearby Tamkang Senior High School.

The service was held in accordance with Christian rites — Lee was a Christian — as well as conventions for a deceased president.

“Confronted with daunting international challenges, he skillfully led the people of Taiwan by promoting pragmatic diplomacy. Taiwan became synonymous with democracy and was catapulted onto the world stage,” Tsai said. “Thanks to his efforts, Taiwan now shines as a beacon of democracy.”

“He was the progenitor of a new era. He led the advancement of Taiwan,” she said, adding that Lee’s life represented the epitome of Taiwan, as the former president had lived through the Japanese colonial era, the period of authoritarianism and then the birth of democracy — of which he was a key figure.

“Although Lee has passed away, his spirit will guide successive generations,” Tsai said.

Lee “planted the roots of democracy and human rights in Taiwan, for which he was praised internationally as ‘Mr Democracy,’ as well as making great contributions to mutual understanding and friendship between Japan and Taiwan,” Japan-Taiwan Exchange Association Chief Representative Hiroyasu Izumi read from a eulogy written by Abe.

In a video submitted to the memorial service, the Dalai Lama said that he regretted not being able to attend the service in person due to the COVID-19 pandemic, but he and Lee had been close friends who were genuine with one another.

The Dalai Lama admired Lee for “protecting Taiwan’s democracy and freedom, as well as Chinese culture, with all his strength,” he said.

“As a friend, I often recall him fondly, and as a Buddhist, I often pray for him,” he said.

The Dalai Lama also said it was possible that Lee would one day return to Taiwan through reincarnation, which he hoped would happen even if he and Lee were unable to recognize each other after.

Lee’s body was cremated on Aug. 14. His ashes are to be put to rest on Oct. 7 at the Wuchihshan Military Cemetery in New Taipei City.

Additional reporting by AP and Reuters

The Dalai Lama yesterday pays tribute to former president Lee Teng-hui in a video recording shown at the official memorial service at the chapel at Aletheia University in New Taipei City. Photo: CNA

Vice President William Lai, back row left, yesterday leads the heads of the five branches of government as they drape the coffin of former president Lee Teng-hui in the national flag at the official memorial service at the chapel at Aletheia University in New Taipei City. Photo: CNA

Annie Lee, left, the daughter of former president Lee Teng-hui, yesterday receives a Presidential Citation on behalf of her father by President Tsai Ing-wen at the official memorial service at the chapel at Aletheia University in New Taipei City. Photo: CNA