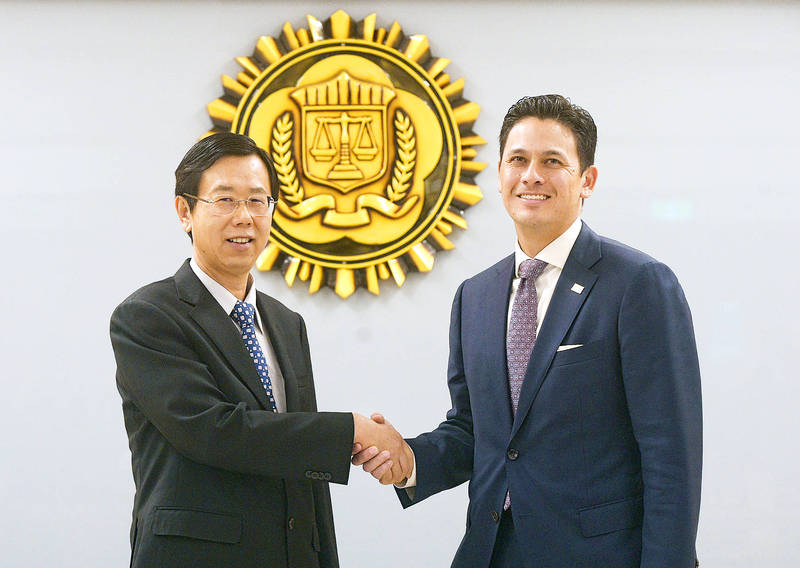 A US Department of Justice indictment against Chinese hackers serves as an exemplary model and a solid foundation on which closer US-Taiwan collaboration could be pursued, Ministry of Justice Investigation Bureau （MJIB） Director-General Leu Wen-jong （呂文忠） said yesterday.

Leu made the remarks at a news conference where FBI liaison to Taiwan Nicholas Garcia told reporters that the US would continue to collaborate with Taiwan.

The US Department of Justice on Wednesday charged five Chinese nationals with working with the Chinese government to target companies developing vaccines for COVID-19, and with stealing hundreds of millions of dollars of intellectual property and trade secrets from companies worldwide, as well as money laundering and identity theft.

In May, CPC Corp, Taiwan （中油）, Formosa Plastics Group （台塑集團） and Powertech Technology Inc （力成科技） were hacked, and an MJIB investigation traced the hacker group to China, Leu said, adding that it informed the US of the incident, as the hackers had routed their IP address through a cloud server based in California.

Using information provided by the MJIB, the FBI analyzed and tracked IP addresses used to conduct command-and-control actions and suspected that Sichuan-based APT41, comprised of current or former employees of Chengdu 404 Network Technology, a Chinese company, had initiated the attack, Leu said.

The FBI considers the group to have close links with the Chinese Ministry of State Security.

The MJIB’s investigative efforts overseas frequently encounter obstacles and this case could serve as an exemplary collaboration on which other US-Taiwan investigations could be built, allowing the MJIB to fulfill its duties as the nation’s bulwark against cybercrime, Leu said.

Speaking on behalf of the US, Garcia said that hackers targeting key facilities and intellectual property are a global threat and that the FBI thanks the MJIB for providing critical information that led it to crack the case.

Garcia quoted FBI Deputy Director David Bowdich as saying during a US Department of Justice conference on Wednesday: “Cyberthreats are not a problem that any one agency can address by itself — so, central to our strategy is the role the FBI plays as an indispensable partner to our federal counterparts.”

The FBI would continue to work with trustworthy partners, such as the MJIB, Garcia added.