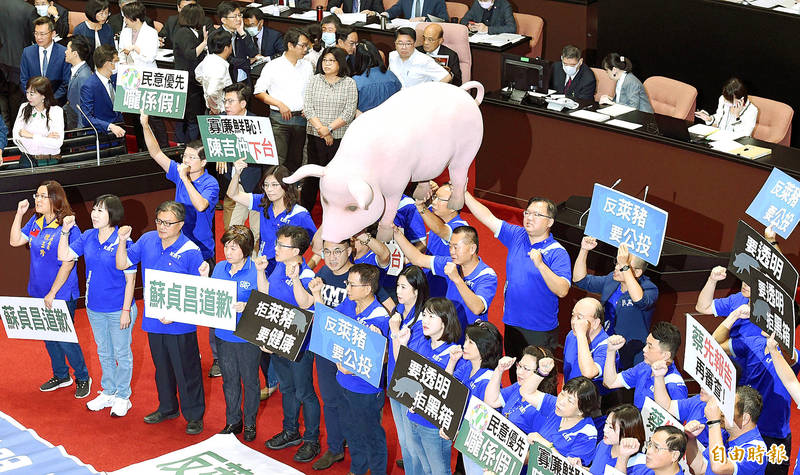 Chinese Nationalist Party （KMT） lawmakers yesterday hold placards and a pig mock-up on the floor of the Legislative Yuan in Taipei as they call on President Tsai Ing-wen to deliver a state of the union address, Premier Su Tseng-chang to apologize for the US pork imports policy and Council of Agriculture Minister Chen Chi-chung to step down, as Democratic Progressive Party lawmakers in the background guard Su and Minister of Health and Welfare Chen Shih-chung. Photo: Liao Chen-huei, Taipei Times

BEST SERVED COLD: KMT lawmakers, armed with a prop pig, attempted to serve the premier two pork dishes and asked him if he could tell which was US pork

The government is not making a trade-off by importing US pork containing residues of ractopamine in exchange for a US trade agreement, Premier Su Tseng-chang （蘇貞昌） said yesterday, adding that the authorities would impose strict checks to ensure food safety.

Su made the remarks during an interpellation session at the Legislative Yuan, during which he presented a report at the request of legislators outlining regulations to loosen restrictions on importing US pork containing the leanness-enhancing additive, which are to go into effect on Jan. 1 next year.

The report also included measures for inspection of the meat, labeling standards and strict compliance measures for vendors.

The Ministry of Health and Welfare conducted a review of safety standards in 2018 and last year, and this year consulted with experts on determining maximum residue limits for ractopamine, he said.

“Based on people’s consumption patterns and international standards, the maximum residue limit was set for 0.01 parts per million [ppm] for ractopamine in imported pork meat, fat and other edible parts, and 0.04 ppm for liver and kidneys,” he said.

Responding to a question from Democratic Progressive Party （DPP） Legislator Kao Chia-yu （高嘉瑜）, Su said that the policy to import US pork is not part of an effort to sign a bilateral trade agreement with the US.

Kao cited an opinion poll that showed that 84.6 percent of respondents supported Taiwan signing a trade agreement with the US, while another survey showed that only about 50 percent supported an agreement if it meant opening up to US pork imports.

“We shall strive for Taiwan to engage in the world and join international trade bodies, but when all member countries open up for US pork containing ractopamine residue, and Taiwan bans it, while wanting to join the body, does that make any sense?” Su said.

Under the pork labeling rules, the government is to inspect vendors to ensure compliance and penalize those with fraudulent or absent labels, he said.

“We have seen a lot of improvement in Taiwan-US relations in the past few years, but it is regrettable that US beef and pork imports have become a stumbling block in bilateral trade negotiations,” Su said.

“Taiwan needs economic growth and vigorous development on external trade, and we must not isolate ourselves from the world,” he said. “Right now is a pivotal moment to open up our doors, for Taiwan to expand our international trade and enhance business opportunities. We must have the courage to take this important step forward.”

Chinese Nationalist Party （KMT） lawmakers in the morning held placards and carried a prop pig onto the legislative floor.

It resulted in a standoff, as KMT members tried to confront Su, but DPP legislators blocked them.

The KMT lawmakers shouted protest slogans, such as: “No to ractopamine pork, yes to health and food safety” and “we want transparency.”

They asked Su to make a public apology over the change in policy on US pork, and for President Tsai Ing-wen （蔡英文） to present a state of the nation address on the issue at the legislature.

During the session, the New Power Party and the Taiwan People’s Party also held news briefings to express their concern over the policy, while putting forward recommendations regarding safety regulations on the US pork issue.

Later in the afternoon during questioning, KMT Legislator Hung Meng-kai （洪孟楷） presented two food dishes and demanded that Su sample them. Hung and others crowded around Su, asking him to tell them which dish contained Taiwanese pork and which was US pork.

When Su did not comply, Hung said that the premier was afraid of eating US pork and Taiwanese pork.

“I am attending the interpellation session and I am here to answer questions in the legislature, not to eat,” Su said.