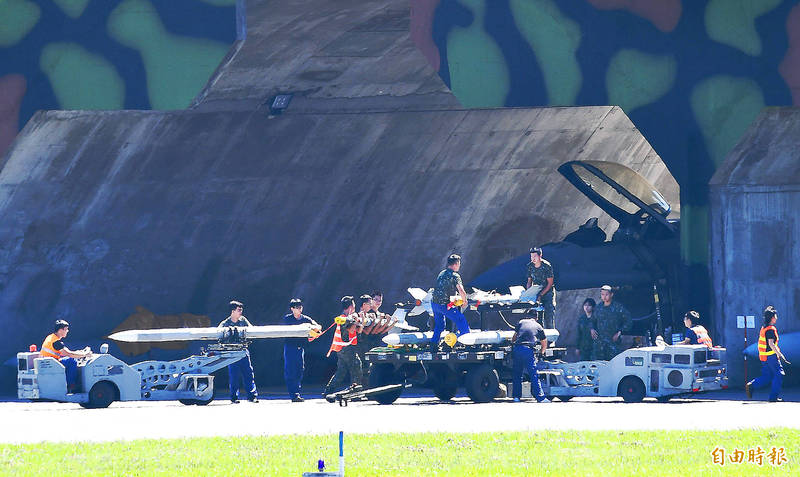 CLOSE ENCOUNTERS: Several of the PLA fighter jets that crossed the median line of the Strait came within 68km of Hsinchu, drawing warnings from Taiwan, the ministry said

At least 18 Chinese military aircraft yesterday flew into the nation’s air defense identification zone （ADIZ） on the second day of a US delegation’s visit, the Ministry of National Defense said, adding that the military responded by deploying an air defense missile system to monitor their activities.

A delegation led by US Undersecretary of State for Economic Growth, Energy and the Environment Keith Krach on Thursday started a three-day visit to Taiwan.

The ministry from Thursday started publicizing the actions of the Chinese People’s Liberation Army （PLA） in Taiwan’s ADIZ on its Web site and Twitter.

According to ministry reports, 18 PLA aircraft were spotted in the nation’s southwest, west and northwest ADIZ as of yesterday morning, including two H-6 bombers, and eight J-16, four J-11 and four J-10 fighters.

The J-11, J-10 and some of the J-16 fighters were seen crossing the median line of the Taiwan Strait, while the H-6 bombers and other J-16 fighters were spotted flying in the nation’s southwest ADIZ and north of the Pratas Islands （Dongsha Islands, 東沙群島）, the ministry said.

The aircraft that crossed the median line were about 68km from Hsinchu, the military said.

The military issued radio warnings at least 24 times and scrambled fighter jets more than 10 times, according to observations by military enthusiasts.

When asked about the matter at the Legislative Yuan yesterday, Premier Su Tseng-chang （蘇貞昌） said that China should take responsibility as a major world power and quickly contain the COVID-19 pandemic that originated in its country.

Instead, China frequently threatens Taiwan with military drills or by dispatching aircraft in the Strait, which shows the world who is the real “troublemaker” and lets Taiwanese know who is the real enemy, Su said.

Taiwanese, no matter their political affiliation, should unite in the face of a common enemy, he said.

Presidential Office spokesman Xavier Chang （張惇涵） called on China to restrain itself, adding that as a regional power, Beijing should work to maintain regional peace.

In response to questions about a PLA announcement yesterday morning that the PLA Eastern Theater Command would start combat exercises near the Taiwan Strait, the ministry said in a statement that it would continue to monitor PLA activities and safeguard national security.

The ministry also called on China to restrain its activities in the region and prevent an escalation of cross-strait tensions.

China’s military intimidation has drawn outrage from Taiwanese, and the tactics are condemned by popular public opinion here, the ministry added.