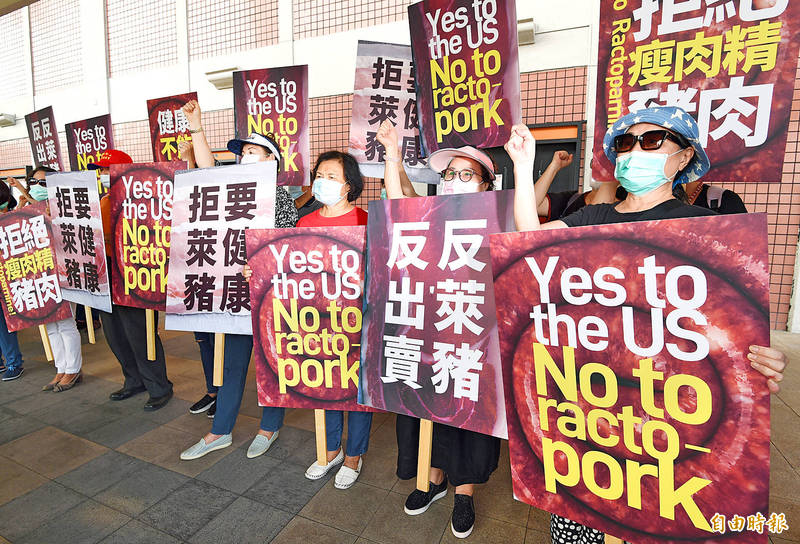 People hold placards outside Taipei International Airport （Songshan airport） yesterday to protest against US pork imports as a delegation led by US Undersecretary of State for Economic Growth, Energy and the Environment Keith Krach arrived in Taipei for a three-day visit. Photo: Liao Chen-huei, Taipei Times

HITCH? A report said that the US had been irritated by Taiwan’s trumpeting of Keith Krach’s visit and it relating the economic dialogue to a trade deal

A delegation led by US Undersecretary of State for Economic Growth, Energy and the Environment Keith Krach arrived in Taipei yesterday afternoon for a three-day visit.

Krach is to attend tomorrow’s memorial service for former president Lee Teng-hui （李登輝）, who died on July 30 at the age of 97, Ministry of Foreign Affairs spokeswoman Joanne Ou （歐江安） said in a statement after Krach’s arrival, adding that Taiwan early last month had expressed the hope that the US would send a high-ranking official to attend.

Other members of the delegation include US Assistant Secretary of State for Democracy, Human Rights and Labor Robert Destro, US Assistant Secretary for Global Markets and Director-General of the US and Foreign Commercial Service Ian Steff, US Ambassador-at-Large for Global Women’s Issues Kelley Currie and former US assistant secretary of defense for Indo-Pacific security affairs Randall Schriver, she said.

It has also been reported that Krach plans to host a new dialogue — whose establishment was first announced by the US on Aug. 31.

The government and the American Institute in Taiwan had refrained from confirming the schedule for Krach’s visit until the US Department of State issued a statement on Wednesday.

The ministry’s statement confirmed Krach’s attendance at Lee’s memorial service, but did not mention the dialogue.

The confirmation came unusually late. The announcement of US Secretary of Health and Human Services Alex Azar’s visit last month was issued four days prior to his arrival.

Asked about the dialogue, Wu said that it has many aspects, and Taiwan and the US are still deliberating the details.

The government would discuss those issues with Krach during his visit to make the necessary preparations for the dialogue, he said, while reaffirming the close ties of the two nations.

The Chinese-language Apple Daily yesterday reported that the US had been irritated by Taiwan’s trumpeting of Krach’s visit and it mistakenly relating the economic dialogue to potential talks about a bilateral trade agreement, which is to be undertaken by the US trade representative.

This caused the US to delay confirming Krach’s schedule and to change his public events into closed-door meetings, the report added.

The ministry denied the claims, saying that they were speculation and did not reflect the truth.

While the dialogue would not take place, there would be “preparatory talks” today, a government official said on condition of anonymity.

The public had expected Azar’s visit to come with a promise of COVID-19 vaccines, but after his departure Tsai instead announced the lifting of restrictions on US pork and beef imports, he said.

Likewise, people expected Krach to start the economic dialogue or trade agreement talks, but then rumors about the US mulling more arms sales to Taiwan have emerged, provoking questions about the real purpose of the trip, he added.

Foreign relations should not consist of backroom deals, Chiang said, calling on the government to be more transparent about Krach’s visit and to report to the legislature.