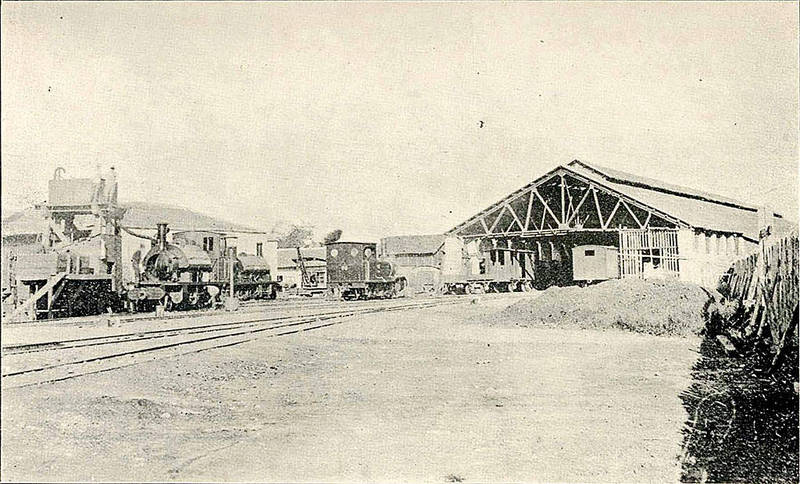 A group of “mourners” gathered on Sept. 2, 1989 at the railroad crossing near Taipei’s Zhonghua Road （中華路） to mark the end of an era. They looked left and right repeatedly to confirm that the train really wasn’t coming. From that day on, Taipei’s trains ran underground.

“In the past, these people found it a huge inconvenience to stand there and wait for the trains to pass. But it has become such a part of their life that it now feels odd for the trains to be gone,” reported the Liberty Times （Taipei Times’ sister newspaper）. Workers began removing the tracks that day and three months later, no trace was left.

That same day, the newly opened Taipei Main Station saw over 160,000 visitors passed through it, many just to see the state-of-the-art, Chinese palace-style structure and ride the nation’s first underground railway.

The building is considered the fourth-generation Taipei Railway Station （there was a temporary one that most historians don’t count）, and is still in use today. The first generation was a simple steel structure built by the Qing Empire in 1891 upon the completion of the Taipei-Keelung line. Since most goods were transported by water before trains were introduced, this first station was referred to as a “railway wharf.”

The station was expanded, demolished and rebuilt several times over the next century, each iteration serving as a major landmark to the nation’s capital.

Liu Ming-chuan （劉銘傳）, the Qing governor of the newly created Taiwan Province, submitted a request to the emperor in 1886 to establish a rail system the following year. In addition to the obvious benefits of transportation, commerce and development, Liu noted that a railroad would make it easier to transport troops in case of a foreign invasion. The French captured Keelung during its war with the Qing in 1884, and defenses were a legitimate concern. Construction began in June 1887.

Entire families traveled from surrounding areas to Taipei in August 1888 to witness the test run of the railroad, which then consisted of one stop between Dadaocheng and Xikou （錫口, near today’s Songshan Train Station）. It officially opened to the public on Nov. 16 with two German-made steam engines making four trips per day. At 8-meters long, the passenger cars were very cramped, and people were required to check all their belongings in the cargo car.

Having never been in a vehicle that fast before, many curious passengers just took the train back and forth for fun, making it a “trendy” activity for the first few months.

“Many passengers didn’t even have any business in Xikou; they just rode the train so they could boast to everyone that they had experienced the ultra-fast scientific wonder,” writes Wu Hsiao-hung （吳小虹） in the book, Return to Taipei Station of the Qing Era （重回清代台北車站）.

There were no proper stations at first, just a “ticketing office” at each stop. The Dadaocheng stop was located not far from today’s Taipei Main Station, just beyond the North Gate （北門, Beimen）. These ticketing offices usually consisted of a few traditional red-brick houses, with room for employee dorms and storage; some smaller stops just had a thatched-roof hut. The first “railroad restaurant” was established when the line extended to today’s Sijhih （汐止） area in April 1890.

By October 1891, the Taipei-Keelung line was complete. On Oct. 20, the first-generation Taipei “railway wharf” was inaugurated. It was a simple steel frame structure with sloped corrugated roofs that covered the crude “platform.”

By 1893, the line had reached Hsinchu, with nearly 1,000 passengers per day. Qing-era operations were plagued by poor management and corruption, and fare-dodging was rampant. Officials and soldiers rode the train for free under pretenses of official business, and also transported personal goods. The officials did a shabby job at maintaining the equipment, and after five years the railway administration had to cut back the frequency of rides due to engine damage.

The Qing ceded Taiwan to Japan in 1895. Taipei Station was reportedly torched during the chaos when the Japanese first occupied the city, but the metal structure survived. The colonizers fixed it up and added a passenger waiting room the following year.

After a massive rerouting project and the opening of the Tamsui line, the Japanese discontinued the original station in 1901, later leasing it to what would become today’s megacorporation Kawasaki Heavy Industries. It was demolished in 1908, and Dadaocheng Station was established in its place. The second-generation Taipei Station was located further east by today’s Zhongshan N Road （中山北路） and featured a renaissance-style red brick building that was much more elegant and imposing than the previous structure. Right outside the entrance was Taiwan’s very first public telephone booth, writes Wu.

The Taiwan Railway Hotel was established across the street in 1908, but it was destroyed by US airstrikes during World War II. Today, the Shin Kong Life Tower sits in its place.

Taipei Rear Station was built from Alishan red cypress in 1923 as the new terminus to the Tamsui Line. During the 1950s, young people moving to Taipei to seek their fortunes exited here, where headhunters greeted them enthusiastically and took them to one of the numerous job placement agencies north of the station. The Tamsui line was terminated in 1988 with the advent of the MRT; the wooden building burned in a fire the following year before any preservation efforts could be made. A small plaza at the intersection of Civic Boulevard （市民大道） and Taiyuan Road （太原路） memorializes this lost structure.

Due to increasing demand, the third-generation, modernist-style building was inaugurated in 1941 with greatly expanded facilities, including a post office, restaurants and lockers.

This station remained in use until February 1986, when the government’s underground railway project warranted a new structure to accommodate the changes. A temporary station was set up next to the construction site — some consider this the fourth-generation Taipei Station and the current one the fifth, but most historians do not count temporary stations. It was torn down in 2000.

The second-generation Taipei Train Station was a renaissance-style red-brick structure reminiscent of other Japanese-era buildings in the area. Photo courtesy of Wikimedia Commons

This “temporary” Taipei Train Station bridged the gap between the discontinuation of the third generation and the inauguration of the fourth in 1989. It was demolished in 2000. Photo courtesy of Wikimedia Commons

The fourth-generation Taipei Train Station was inaugurated on Sept. 2, 1989, and remains in use today. Photo courtesy of Wikimedia Commons