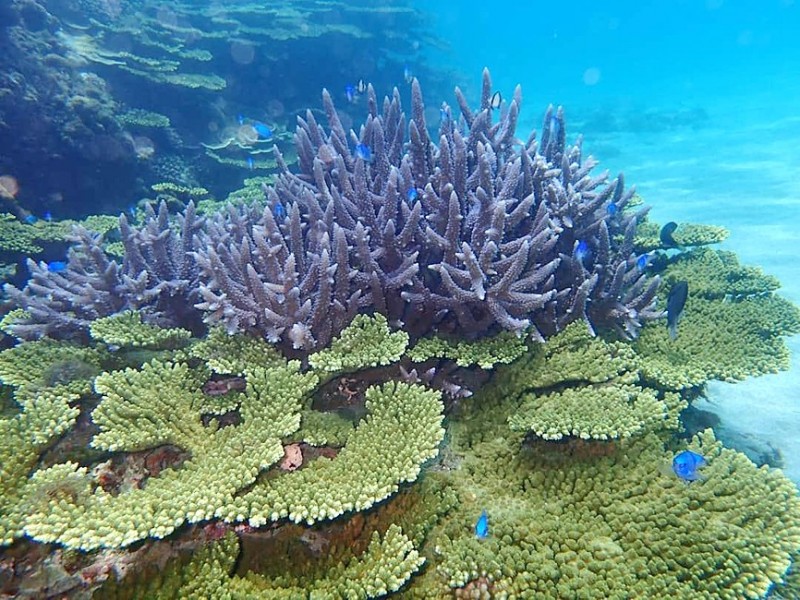 A coral colony is pictured in waters off Dongyuping in Penghu County on Sunday last week. Photo courtesy of a reader

Environmentalists raised concerns that coral reefs near islands in southern Penghu County are at risk due to warming ocean waters and the tourism industry.

On Dongyuping （東嶼坪） — one of the islands that comprise the South Penghu Marine National Park — corals are covered with sand, while other reefs have been damaged by tourism, he said.

Marine biologist Chen Chin-chuan （陳盡川） said that during a dive close to the marine park’s Siji Islet （西吉嶼）, he saw that coral bleaching had spread there, too.

However, coral damaged by natural phenomena — such as a typhoon or heavy rainfall — can potentially recover, he said.

Sand that had been piled up near the port on Dongyupingyu for a public project was swept up by a storm and deposited on corals along the islet’s coast, covering them with a 20cm layer and likely killing them, Chen said.

Boats have been anchoring above corals so that tourists can easily find them while diving, he said, adding that this would harm the reefs.

The marine park headquarters has installed moorings throughout the park that allow boats to anchor near the reefs without damaging the corals, the park said.

Boat operators who engage in activities that could damage the corals would face fines of NT$3,000 per incident, in addition to the cost for coral reef recovery measures.