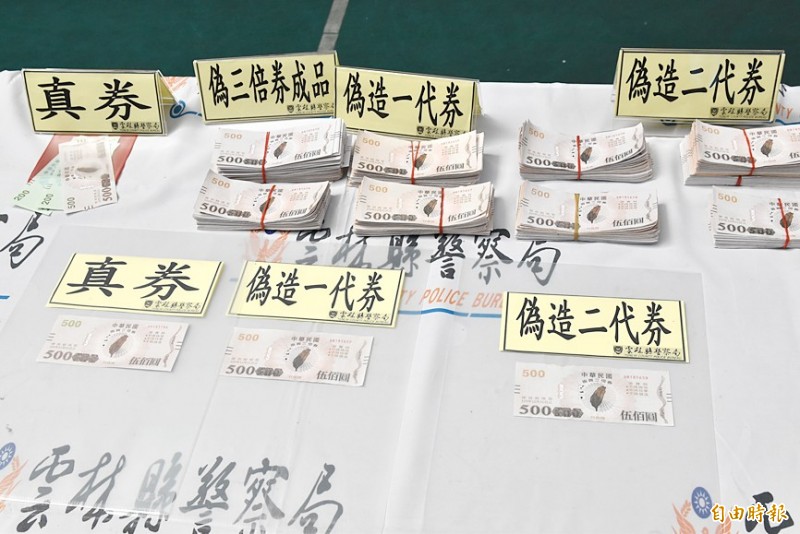 COPYING HISTORY: A prosecutor said that the main suspect has a criminal record of counterfeiting and has been linked to about 20 cases over the past few decades

Raids at several locations in the county on Thursday uncovered a production center and warehouses after business owners had reported receiving fake vouchers in the past few weeks, police officials told a news conference.

Su Ching-wu （蘇慶梧）, 70, is suspected to be the head of the counterfeit operation, police said, adding that he and a man surnamed Chang （張）, who they suspect also had some control over the operation, were kept in custody, as the likelihood is high that they would flee, collude over testimony or tamper with evidence.

Two other suspects were released without bail, and another suspect, a woman surnamed Chang （張）, was released after posting bail of NT$50,000 （US$1,693）, police said.

Officers found 1,094 counterfeit vouchers with NT$500 face values, as well as 798 unfinished vouchers, with the total value of both sets being NT$2.5 million, they said.

They also found stacks of fake NT$100 bills, they said.

Su has a criminal record of counterfeiting and has been linked to about 20 cases over the past few decades, serving several prison terms, Chu said.

He finished his most recent jail term in 2018, Chu said.

Police officials said that Su’s latest operation has been shut down and only a few forged vouchers were used.

The government’s Triple Stimulus Voucher program aimed to revitalize the economy amid the COVID-19 pandemic, with Taiwanese and foreign spouses of Taiwanese eligible to buy NT$3,000 of vouchers for NT$1,000.