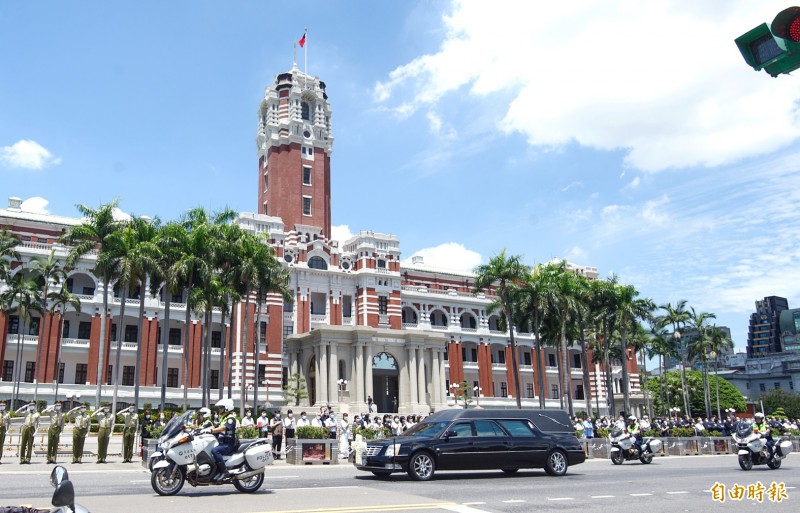 ‘UNCLE A-HUI’: People lined the streets of Taipei as a motorcade carrying the former president’s body went from the hospital to a church funeral to a crematorium

Family members and close friends bade farewell to former president Lee Teng-hui （李登輝） at a private funeral service at Taipei’s Che-Lam Presbyterian Church yesterday morning, after which a funeral procession made a symbolic lap around the Presidential Office Building before winding its way to the Taipei City Second Funeral Parlor.

Lee, dubbed “Mr. Democracy” after he ended Taiwan’s autocratic rule in favor of free elections, died on July 30 at the age of 97.

Lee’s body was transported in a hearse, departing from Taipei Veterans General Hospital at 6:38am, where about 300 doctors and nurses lined the road to pay their respects.

“The medical staff came out of their own volition to send off the former president,” said Hwang Shinn-jang （黃信彰）, the hospital’s deputy director and spokesman. “They wanted to express their gratitude and regret on the departure of a good friend, especially the medical team who cared for him over the past decade.”

“We believe the former president has become ‘1,000 winds’ that are free across the vast sky to always watch over us and protect Taiwan,” Hwang said, alluding to lyrics from A Thousand Winds （千風之歌）, one of Lee’s favorite songs.

At the funeral service, a church bell rang 21 times at 10am.

A funeral procession made a symbolic lap around the Presidential Office Building, where Lee held office from 1988 to 2000, during which he became Taiwan’s first president by direct popular vote.

The procession wound through Taipei’s streets without a portrait of Lee or music.

From the Presidential Office Building, the motorcade traveled along Roosevelt, Sinsheng S and Sinhai roads to the funeral parlor for the cremation of the body.

At shortly before 2pm, Lee Kun-yi （李坤儀）, the former president’s granddaughter, departed with an urn containing his ashes to return to the Lee family residence.

A burial is planned for Oct. 7 at the Wuchihshan Military Cemetery in New Taipei City.

Lee Tung-hui’s wife, Tseng Wen-hui （曾文惠）, was at the home to receive the urn. She did not attend the rest of the day’s events over concern for her health, sources said.

A memorial to the former president is open to the public at the site, with people leaving messages in his memory.

However, Cheng, who has opposed efforts to remove memorials to Chiang Kai-shek （蔣介石）, was arrested immediately after the incident at about 1pm and taken to the Taipei Prosecutors’ Office for questioning.

Prosecutors said that they intend to charge her and have ordered her to remain at home pending the judicial process.

Presidential Office spokesman Xavier Chang （張惇涵） said: “We condemn such irrational, violent acts... Our office urges all people who visit the memorial to respect the wishes of President Lee and his family in a solemn and dignified manner.”