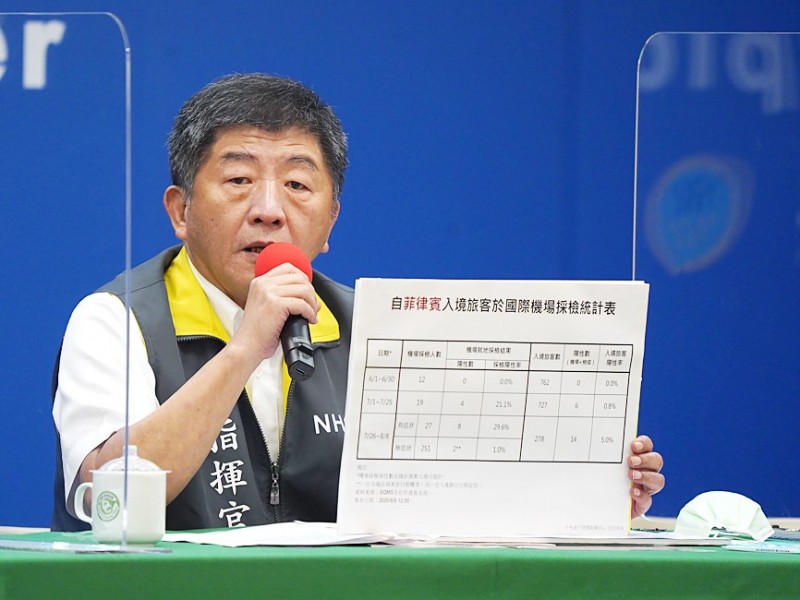 Minister of Health and Welfare Chen Shih-chung holds a news conference at the Central Epidemic Command Center in Taipei on Sunday. Photo: CNA

The Central Epidemic Command Center （CECC） yesterday announced that the parents of children in China aged two to six, who have one Taiwanese parent and hold a Taiwan resident certificate, would from today be allowed to apply for their children to enter Taiwan.

Minister of Health and Welfare Chen Shih-chung （陳時中）, who heads the center, made the announcement regarding the children who have been stranded in China due to the COVID-19 outbreak.

There are 532 children and 68 parents who meet the expanded eligibility criteria, he said, citing Mainland Affairs Council data.

The CECC on July 16 allowed the parents of such children under the age of two to apply to bring them home. More than 100 children met those criteria.

Chen said that eligible children and their parents would need to quarantine at home for 14 days upon returning to Taiwan, and their details would be handled by the National Immigration Agency.

The center hopes to eventually allow all Chinese children who have one Taiwanese parent and hold a Taiwan resident certificate to start school in Taiwan next semester, he said, but added that policy adjustments would be made according to further evaluations of the situation.

Separately yesterday, Chen reported a new case of COVID-19 infection, a Taiwanese man in his 50s who returned from the Philippines, marking the nation’s 481st confirmed case.

The man on June 26 traveled to the Philippines on a business trip and returned home on Monday, Chen said.

The man developed diarrhea from July 26 to 28, but relieved the symptoms by taking medicine on his own, he said.

The man had chills late last month and again on Saturday, as well as fatigue the same day, but he took medicine on his own, he said.

The man wore personal protective equipment and a mask on the flight back to Taiwan, and was tested at the airport before going to a quarantine facility, he said.

The center has identified 18 people who came into close contact with the man on the flight, including two colleagues and five passengers who sat close to him, Chen said, adding that they would be placed in home isolation.

Eleven crew members wore masks and protective gear on the flight and have been asked to practice self-health management, he said.

Centers for Disease Control （CDC） Deputy Director-General Philip Lo （羅一鈞） said that the local cases in Vietnam were initially linked to Da Nang General Hospital, but more cases have since been detected in 15 cities and provinces.

CECC advisory specialist panel convener Chang Shan-chwen （張上淳） said that most of the 24 COVID-19 patients in Taiwan who are still hospitalized have mild symptoms.

However, two have developed relatively severe symptoms, one of whom has been placed on a ventilator, but they are in stable condition, Chang said.