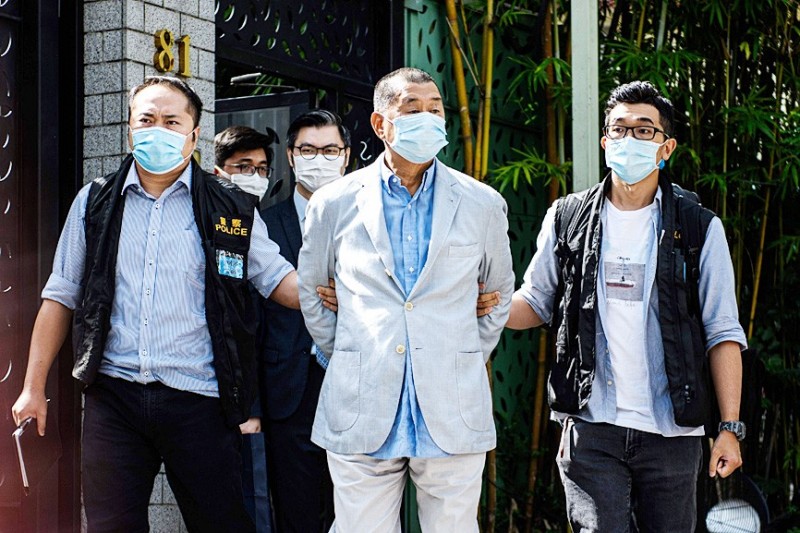 TWO SONS TOO: While police did not released the names of the nine others arrested, a pro-democracy Web site said that they included the eldest two of Lai’s four sons

Hong Kong authorities yesterday broadened their enforcement of a new National Security Law, arresting tycoon Jimmy Lai （黎智英）, searching the headquarters of his Next Digital （壹傳媒） group and carting away boxes of what they said was evidence.

The police action marked the first time the law was used against news media, stoking fears that authorities are suppressing press freedom.

Next Digital operates the Chinese-language Apple Daily, which last year frequently urged readers to take part in the anti-government protests.

Hong Kong police arrested Lai, 71, yesterday morning, an aide to the businessman said, in the highest-profile detention under the new law since it took effect on June 30.

Mark Simon, a Next Digital executive and Lai’s aide, said Lai was charged with collusion with foreign powers.

He said police searched the homes of Lai and two of his sons and detained four other members of the media company.

Hong Kong police said they arrested at nine men and one woman between the ages of 23 and 72 on suspicion of violating the new security legislation, with offenses including collusion with a foreign country and conspiracy to defraud.

They did not release the names of those arrested or provide further details of the charges.

However, the pro-democracy Stand News Web site reported that Lai’s eldest son, Lai Kin-yan （黎見恩）, was wanted for conspiracy to defraud, while his second son, Lai Yiu-yan （黎耀恩）, was wanted for colluding with foreign countries or foreign forces to endanger national security.

Following Jimmy Lai’s arrest, about 200 police raided Next Digital’s headquarters, cordoning off the area, searching desks and at times getting into heated exchanges with staff.

What police were looking for in the building was not clear, although they later said they took away 25 boxes of evidence for processing.

Jimmy Lai, who was arrested at his mansion in Kowloon, was also brought to Next Digital’s headquarters, where he remained for about two-and-a-half hours before police took him away in a car.

“We are completely shocked by what’s happening now, with the arrest and followed by the ongoing raid inside the headquarters of Next Digital,” Hong Kong Journalists Association chairman Chris Yeung （楊健興） said.

“With the passage of the National Security Law and the really tough powers given to the police in their operations, we have seen now what we call ‘white terror’ become a reality, which will affect media organizations and journalists’ reporting,” Yeung said.

The share price of Next Digital soared more than 200 percent in the afternoon, following posts on a popular online forum encouraging investors to support the company by buying its stock.

Police officers remove boxes of material from Next Digital’s headquarters in Hong Kong after its founder, Jimmy Lai, and several others were arrested under the territory’s new National Security Law. Photo: Reuters

A few supporters of China celebrate outside Next Digital’s headquarters in Hong Kong after founder Jimmy Lai was detained by the territory’s new national security unit yesterday. Photo: Reuters