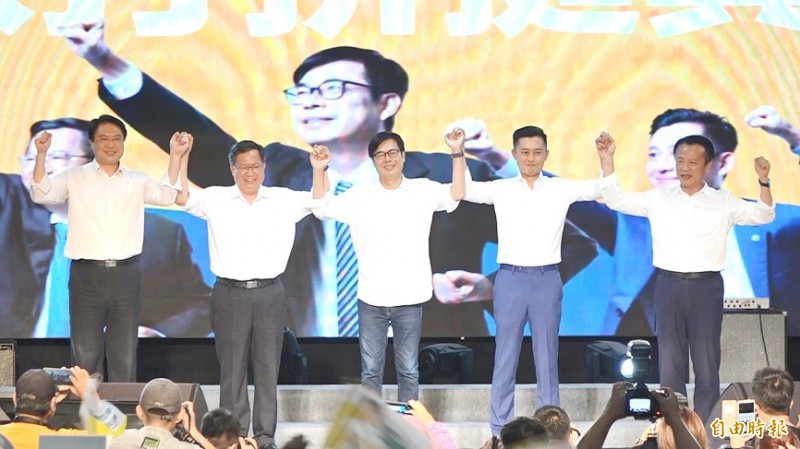 KAOHSIUNG CAMPAIGN: Top DPP officials attended a rally last night, the KMT is working on its election-eve rally and Taipei Mayor Ko Wen-je worked the crowds for the TPP’s man

Campaigning for the Kaohsiung mayoral by-election ratcheted up a notch yesterday ahead of Saturday’s vote, as the three candidates canvassed voters in the hope of being the one to succeed Han Kuo-yu （韓國瑜） of the Chinese Nationalist Party （KMT）, who was removed from office after a June 6 recall vote.

The party’s Kaohsiung chapter has only one job ahead of the election: to canvas for votes, he added.

The party has invited DPP Legislator Lai Pin-yu （賴品妤） and Chen Chi-mai’s international affairs consultant Enoch Wu （吳怡農） — both considered leaders among the DPP’s younger generation — to appear in a campaign video, hoping to increase the turnout rate among voters aged 40 or under, Liao said.

The party’s six county commissioners and mayors have been invited to appear in a second video to show that having the DPP in power would ensure quality governance, he said.

The DPP also plans to roll out a series of videos in which Chen Chi-mai explains his policy platforms and his determination to institute change in Kaohsiung, he said.

The KMT said that KMT Chairman Johnny Chiang （江啟臣） would be in Kaohsiung on election day to show support for its candidate, Kaohsiung City Councilor Jane Lee （李眉蓁）.

The KMT is considering having Han share the stage with Lee at a rally on Friday night, KMT spokeswoman Hung Yu-chien （洪于茜） said, adding that several high-level party officials would also stump for Lee on Friday.

KMT headquarters officials believe the damage from a plagiarism scandal over Lee’s graduate thesis has diminished, and Lee is ready for the election, the source said.

The KMT believes pan-blue supporters would support Lee “for the sake of Kaohsiung’s development,” the source said.

Wu told supporters that while politicians unequivocally enjoy election time, those who would neglect the public’s interest after being elected would be guilty of a grave crime.

“Those lacking ability should not run for mayor or for president,” he said.

Wu, Ko and the campaign team took part in an anti-pollution march yesterday that had been organized by local civic groups and was attended by a large number of residents.

Chen Chi-mai also attended the march, while Lee, due to her campaign schedule, showed up at the endpoint to voice support for the appeal.