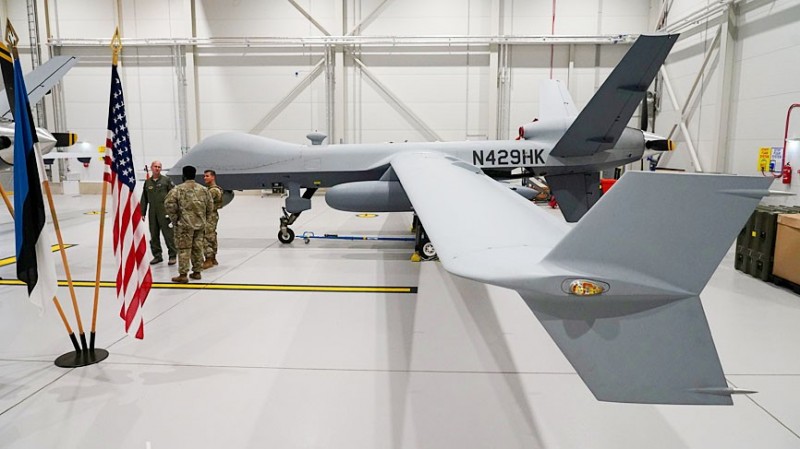 A US Air Force MQ-9 Reaper drone sits in a hanger at the Amari Air Base in Estonia on July 1. SeaGuardian drones, which are also manufactured by General Atomics Aeronautical Systems, are similar to Reaper drones. Photo: Reuters

BOLSTERING DEFENSES: The deal would need the approval of the US Congress, which might receive formal notification as early as next month, two sources said

The US is negotiating the sale of at least four sophisticated aerial drones to Taiwan for the first time, aircraft that can keep watch over huge swathes of sea and land, six US sources familiar with the negotiations said.

The SeaGuardian surveillance drones have a range of 6,000 nautical miles （11,100km）, far greater than the 300km range of Taiwan’s fleet of drones, potentially giving the nation greater capacity to peer into China, observing its air force, missiles and other facilities.

While the US Department of State tacitly authorized the sale of the uncrewed aerial vehicles, two of the people said, it is not known whether the US officials have approved exporting the drones with weapons attached, one of them said.

The deal must be approved by the US Congress, which might receive formal notification as soon as next month, two of the people said. Lawmakers could block a final agreement.

After reports about a possible drone sale, Chinese Ministry of Foreign Affairs spokesman Wang Wenbin （汪文斌） said that the US should stop arms sales to Taiwan to avoid affecting bilateral relations.

Republican and Democratic US senators on Thursday introduced legislation that would block the export, transfer or trade of many advanced drones to countries that are not close US allies — sales would be allowed to NATO members, Australia, Israel, Japan, New Zealand and South Korea.

A deal with Taiwan would be the first drone sale after US President Donald Trump’s administration moved ahead with its plan to sell more drones to more countries by reinterpreting an international arms control agreement called the Missile Technology Control Regime.

Taiwan’s military is well-trained and well-equipped with mostly US-made hardware, but China has a huge numerical advantage and is adding advanced equipment of its own, including stealth fighters, anti-satellite missiles and aircraft carriers.

Taiwan, which is bolstering its defenses in the face of what it sees as increasingly threatening moves by Beijing, early this year submitted its request to buy armed drones, one of the people familiar with the talks said.

The US last week sent Taiwan the pricing and availability data for the deal, a key step that denotes official approval to advance the sale, but it is non-binding and could be reversed.

A deal for the four drones, ground stations, spares, training and support could be worth about US$600 million, using previous sales as a guide.

There could also be options for additional units in the future, one of the people said.

In Taipei, the Ministry of National Defense declined to comment on the Reuters report, but Premier Su Tseng-chang （蘇貞昌）, in response to media queries, reiterated the nation’s resolve to collaborate with like-minded nations to uphold regional peace, protect the nation’s sovereignty and ensure people’s safety.

At a time when the world is affected by COVID-19, the government hopes that China would focus on the health of its people and make contributions to slowing the virus’ spread, he said, adding that this is not the time for China to menace Taiwan with its warplanes and undermine regional peace.

The US has been eager to sell Taiwan tanks and fighter jets, but the deal to sell drones would be notable, as only a few close allies have been allowed to purchase the largest US-made drones.

The Taiwanese government has a fleet of 26 Albatross drones made locally by the Chungshan Institute of Science and Technology. The drones can fly 160 nautical miles （296km） — 80 nautical miles before returning to base — records kept by Bard College’s Center for the Study of the Drone showed.

General Atomics Aeronautical Systems Inc’s SeaGuardian has an airframe that can handle carrying weapons — but only if contractually allowed by the US government.