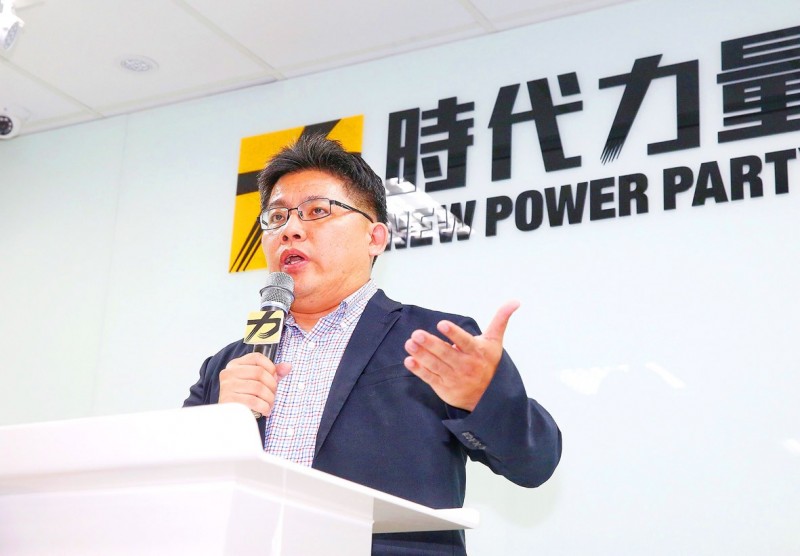 Former New Power Party （NPP） chairman Hsu Yung-ming’s （徐永明） withdrawal from the party over his alleged involvement in a corruption scandal failed to appease some young members, with two Taipei city councilors saying that they have also withdrawn from the party in protest of its handling of Hsu’s case

The party confirmed that it had received Hsu’s application to leave the party via fax at 3:50pm yesterday before its Disciplinary Committee’s scheduled meeting at 5pm.

Within an hour of the party receiving Hsu’s application, Taipei city councilors Lin Ying-meng （林穎孟） and Huang Yu-fen （黃郁芬） issued a statement, saying that they were leaving the party, too.

“As independent legislators, we would continue to oversee the Taipei City Government and residents in the city,” they said.

The two said that they joined the relatively young party and ran in local elections to reform politics in Taiwan, so that more young people’s voices could be heard.

However, the party forgot why it was formed and instead inherited many corrupt political practices, they said.

“The party management often used the news media to launch mudslinging campaigns against members with different opinions from theirs, which has already caused several legislators to leave the party,” they said.

“We have tried our best to communicate with the party’s senior management. Not only were our opinions ignored, but we were at the receiving end of unsubstantiated and fabricated allegations. The same thing happened again when the party tried to weather the crisis caused by Hsu’s alleged involvement in the corruption scandal,” they said.

The way the party handled Hsu’s case also made the public question whether it has double standards when it deals with members who contravene party regulations, they said, adding that the punishment and penalties were decided based on the people involved in the transgressions, rather than the transgressions themselves.

Acting NPP Chairman Chiu Hsien-chih （邱顯智） said that the Disciplinary Committee has moved to dismiss Hsu’s case, as he is no longer a party member, adding that it would leave investigations to the prosecutors.

In view of the incident, the party would in two weeks present a code of ethics and a plan to reform, he said.