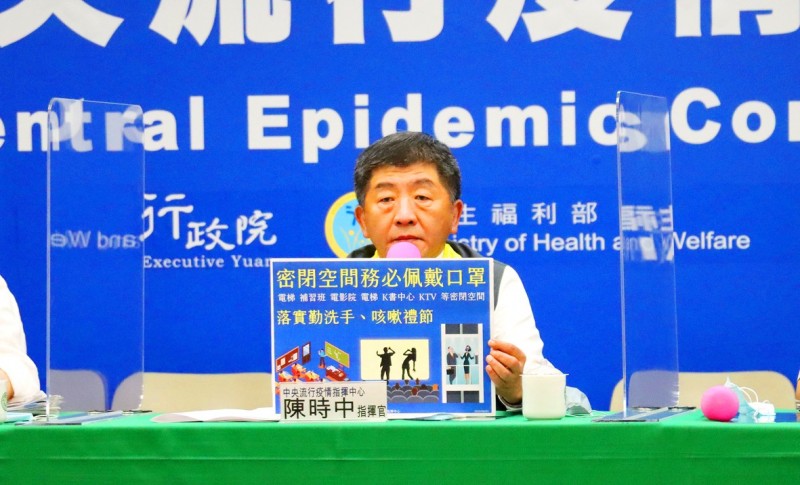 A Japanese man on Saturday tested positive for COVID-19 after returning to Japan from Taiwan, and a Hong Kong man who returned to the territory tested positive on Sunday, the Central Epidemic Command Center （CECC） told a news conference yesterday.

Minister of Health and Welfare Chen Shih-chung （陳時中）, who heads the center, said that it was informed by the Japanese government via its National Focal Point, a communication portal within the WHO’s International Health Regulations, that a man who returned from Taiwan tested positive for the virus, although he was asymptomatic.

The man is an engineer in his 30s who entered Taiwan on June 15 and remained in isolation until June 29 before working at an office in northern Taiwan, Chen said, adding that the man was tested for COVID-19 upon arrival in Japan.

Contact tracing was initiated upon receiving the information and 80 people who had close contact with the man have been identified, including people he encountered at his workplace, hotel, shops and on the same flight to Taiwan, Chen said.

As of yesterday afternoon, 36 of the contacts have been ordered into isolation at home and eight had departed Taiwan, while 71 of the 72 still in the nation have been tested for the virus, he said.

Tests on close contacts and others considered at higher risk in the two closed investigations were all negative, Chen said.

The Japanese student tested negative in an antibody test in Japan on July 18, while a second PCR test on the Thai worker on Monday was “uncertain,” he said.

In the case of a Belgian engineer who tested positive before his planned departure from Taiwan last week, PCR and antibody tests have been conducted on 461 people he had contact with, Chen said, adding that so far 444 PCR tests and 271 antibody results have been negative, with the remainder still being evaluated.

Meanwhile, Hong Kong authorities said that a man who returned from Taiwan on Monday last week tested positive for COVID-19.

However, as the man had broken quarantine regulations after arriving at his hotel in Hong Kong, the territory was treating it as a local infection, Centers for Disease Control （CDC） Deputy Director-General Chuang Jen-hsiang （莊人祥） said.

The man had attempted to travel to Taiwan again, but was stopped at the airport, authorities said, adding that he tested positive for COVID-19 on Sunday.

Among 30,056 people who traveled from Taiwan to five countries that conduct testing on all arriving travelers — China, Japan, Malaysia, the Philippines and Thailand — in June and last month, only three positive cases — the Thai worker, the Japanese student and the Belgian engineer — were reported, a rate of 0.08 percent, Chen said.

“Taiwan has reported no domestic cases for a long time, but that does not mean there is no risk of local infection,” he said. “However, we believe the risk is very low.”

While the CECC promotes a “new disease prevention lifestyle” as it seeks to boost social distancing and mask use to 70 to 80 percent, observations show that only 30 to 50 percent of people in Taiwan follow its guidelines, Chen said.

The center strongly advises people to wear masks in crowded and confined spaces, he said.

“There are eight situations in which people should take particularly care to wear a mask,” he said. “They are: when at a healthcare facility; on public transportation; at marketplaces — including department stores, hypermarkets, traditional markets and night markets; at places of learning, including cram schools; at performances or competitions; at places of worship, including temples and churches; at recreational facilities, including movie theaters, karaoke establishments, pubs and dance halls; and at large events,” he said.

Meanwhile, due to a rapid increase of confirmed cases in Japan, that nation has been removed from a list of low to medium-low infection risk areas that short-term business travelers can apply to have a shortened quarantine period upon their return to Taiwan, Chen said.

Asked whether members of a delegation led by US Secretary of Health and Human Services Alex Azar would face quarantine upon arrival, Chen said that they would not be quarantined, but would be kept in a “diplomatic bubble.”

Members of the delegation would need to provide a negative PCR result from a test conducted within three days of their arrival in Taiwan, arrive on a chartered plane, receive another PCR test upon arrival in Taiwan, stay at a quarantine hotel, act as a group and avoid exposure to the general public, he said.

High-standard disease prevention measures would be maintained during meetings with President Tsai Ing-wen （蔡英文） and other officials, Chen said.

He and previous health ministers are glad to hear that Azar would visit Taiwan, as it symbolizes a big step forward for Taiwan, Chen said.