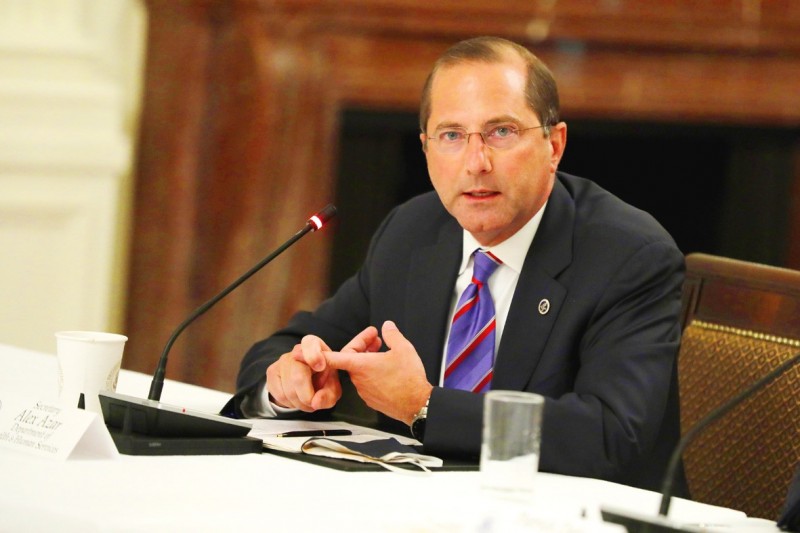 US Secretary of Health and Human Services Alex Azar speaks at an event at the White House in Washington on July 7. Photo: EPA-EFE

ALEX AZAR: The first visit by a head of the Department of Health and Human Services would strictly observe the CECC’s special regulations, the Ministry of Foreign Affairs said

US Secretary of Health and Human Services （HHS） Alex Azar is to lead a delegation to Taiwan — the highest-level visit by a US Cabinet official since the two sides cut formal relations in 1979.

The plan was announced yesterday morning by the US Department of Health and Human Services and confirmed by the Ministry of Foreign Affairs （MOFA）.

Taiwan and the US only issued statements saying that the visit would happen “in the coming days.”

MOFA said that due to security concerns, it would not disclose Azar’s schedule, except to say that he would visit President Tsai Ing-wen （蔡英文）, Minister of Foreign Affairs Joseph Wu （吳釗燮）, Minister of Health and Welfare Chen Shih-chung （陳時中）, the Central Epidemic Command Center （CECC） — which is headed by Chen — and meet with Taiwanese health experts.

Azar’s trip marks the first visit to Taiwan by an HHS secretary, the first Cabinet member to visit in six years and the highest-level visit by a US Cabinet official since 1979, the department said in a news release.

The visit is part of a US policy to send high-level US officials to Taiwan to reaffirm bilateral ties under the US’ Taiwan Travel Act, which was signed into law by US President Donald Trump in 2018, it said.

The last publicly known visit by a US Cabinet official was by then-US Environmental Protection Agency administrator Gina McCarthy in 2014, the Central News Agency reported.

“I look forward to conveying President Trump’s support for Taiwan’s global health leadership and underscoring our shared belief that free and democratic societies are the best model for protecting and promoting health,” Azar was quoted as saying in the department’s statement.

“This trip represents an opportunity to strengthen our economic and public health cooperation with Taiwan, especially as the United States and other countries work to strengthen and diversify our sources for crucial medical products,” he said.

While in Taiwan, Azar would give a major speech to public health graduate students and alumni of the US Centers for Disease Control and Prevention （USCDC） training program, the HHS said.

“Visitors are working closely with relevant Taiwan authorities to minimize health risks to everyone participating in this visit,” the AIT said.

They would obtain reports of negative test results for COVID-19 before they board a US chartered flight, and would receive tests again upon arrival in Taiwan, MOFA said, citing special regulations approved by the CECC.

While in Taiwan, they would have their temperatures and health conditions checked every day, wear masks, maintain proper social distancing and be transported by special vehicles to avoid close contact with members of the public, it said.

Their accommodation would be arranged in compliance with CECC regulations, it said.

Azar and Chen on April 27 spoke by telephone for 30 minutes, and have participated in Taiwan-US virtual forums related to disease response over the past few months.

With the US expected to launch the first COVID-19 vaccine this year, there might be discussions over the authorization of supplies, an issue that has national security implications, Chan said.

Asked if the disease prevention plans for the delegation would be adequate, Chan said that the White House conducts regular virus tests of high-ranking officials, so the risk of infection would be low.

Taiwan should require that its officials, as well as all visitors to the nation, be tested, instead of only having passive quarantine measures, he said.