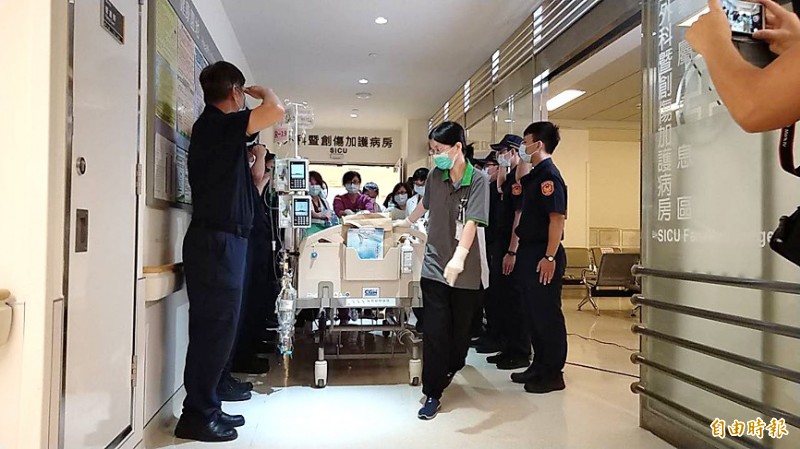 The family of rookie police officer Yang Ting-hao （楊庭豪）, who died after being severely injured in a traffic accident on Sunday, has donated his organs and corneas, family members told a news conference yesterday at Far Eastern Memorial Hospital in New Taipei City’s Banciao District （板橋）.

A 17-year-old unlicensed scooter driver surnamed Chang （張） collided with a police scooter ridden by Yang shortly after midnight on Sunday as Yang and two colleagues were headed to a fight that had been reported in Shulin District （樹林）.

Paramedics had to restart his heart before transporting him to the hospital, and while Yang’s vital signs improved after treatment, he scored 3 on the Glasgow Coma Scale, the lowest possible score, indicating he had suffered severe brain injuries, Hung said.

After Yang spent 24 hours on life support, his family was briefed on his prognosis, and agreed to sign the organ donation forms, and doctors pronounced him brain dead.

His family said that they believe Yang would have wanted his organs to benefit others.

Ten families would benefit from the donations, they added.

In related news, Chinese Nationalist Party （KMT） Legislator Sandy Yeh （葉毓蘭） said she is considering proposing an amendment to Article 185-3 of the Criminal Code that would include unlicensed driving in the list of offenses and stipulate that parents of offending minors should be punished.

The parents of minors or those aged 18 who are found to have driven without a license and caused the death of others should be subject to collateral punishment, as they have failed in their duties as legal guardians or parents, Yeh said.

Such an amendment would provide justice for Yang and provide legal protection for parents of accident victims, she said.

The major cause for the high mortality rates in category A1 traffic accidents — those in which the victim dies within 24 hours — was unlicensed driving, greater even than driving under the influence （DUI）, Yeh said.

Statistics from 2016 and 2017 showed there were 301 cases of DUI-linked deaths and 369 deaths caused by unlicensed driving, which had also been cited as the main cause in more than two-thirds of traffic accidents that led to the deaths of adolescents, she said.

Last year there were 62 traffic accidents in which children or adolescents aged 13 to 17 were killed, the lawmaker said.

A “certain group” of juvenile delinquents should be targeted in the move to strengthen the law, she said, without elaborating.