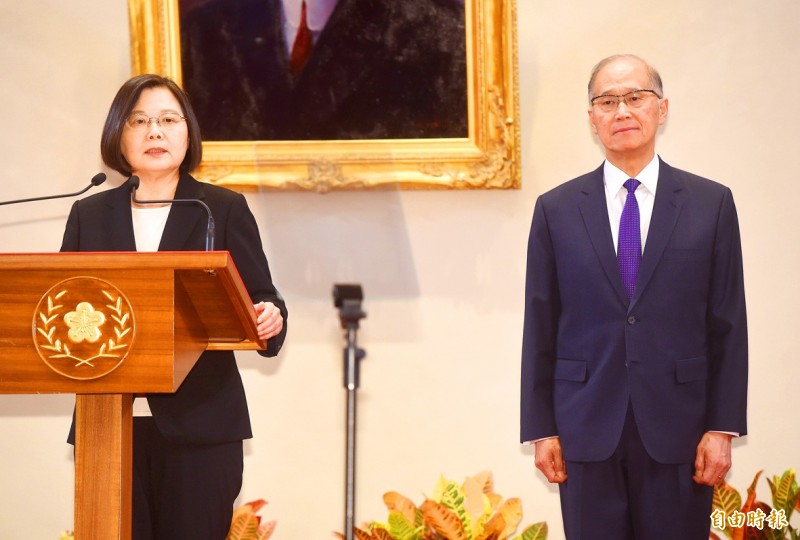 ‘PUBLIC TRUST’: President Tsai Ing-wen thanked David Lee for accepting the new post at such short notice and expressed confidence in his ability to adjust to his new role

Su Jia-chyuan said that he was worried it could negatively affect Tsai’s presidency.

Su Chen-ching is accused of taking bribes from businessman Lee Heng-lung （李恆隆） to lobby for a legal amendment.

Lee Heng-lung has been engaged in a legal fight with Far Eastern Group （遠東集團） chairman Douglas Hsu （徐旭東） over ownership of the Pacific Sogo Department Store （太平洋崇光百貨） chain since the early 2000s.

Prosecutors suspect that Su Chen-ching and others had been accepting bribes since 2013 to lobby for a retroactive amendment to the Company Act （公司法） clauses on capital increases, which would give Lee Heng-lung’s company legal grounds to regain control of Pacific Sogo.

David Lee, who was the National Security Council secretary-general until he was appointed to head the SEF in May, is an “important partner” in the nation’s politics, Tsai said.

The president thanked Lee for accepting the reassignment on such short notice and expressed confidence in his ability to adjust to the new position.

Tsai warned legislators across party lines against taking bribes, saying that “the goal of engaging in politics is not to seek personal gain, but to work for the betterment of Taiwan.”

Tsai said she understood Su Jia-chyuan’s decision to resign and that she respected it.

The DPP would discuss with the Executive Yuan the best way to proceed with penalties for the legislators implicated in the case, she said.

Despite pressure on the party over the case, it would handle the issue with professionalism, she said.

If the implicated are found guilty, they would be punished in accordance with the law, with no regard to the fact they are members of the ruling party, she said.

“However, even if they are not guilty according to the law, that does not mean the case would not impact the public’s impression of the government, or harm the public’s trust,” she said, adding that Cabinet members should be vigilant in their actions, and hold themselves to higher standards.

David Lee’s first task in his new post at the Presidential Office would be to organize a state funeral for former president Lee Teng-hui （李登輝）, Tsai said.