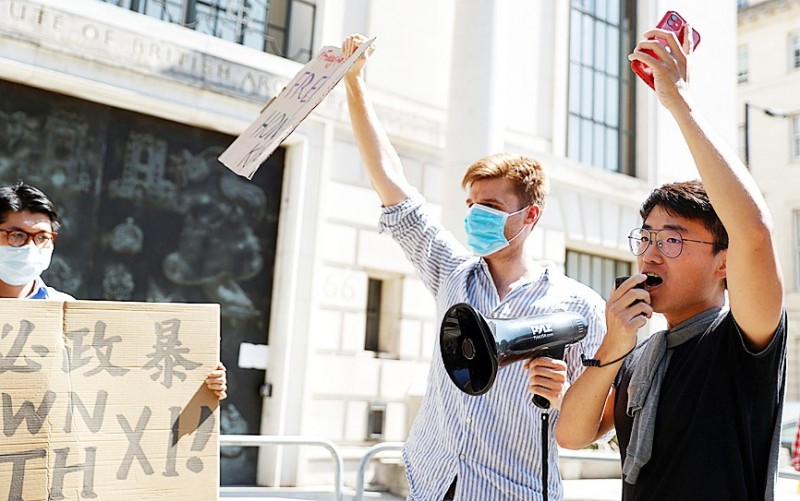 Simon Cheng, right, speaks during a protest against Hong Kong’s deteriorating freedoms outside the Chinese embassy in London on Friday. Photo: Reuters

They include Samuel Chu, a US citizen, Nathan Law （羅冠聰）, a prominent campaigner who has relocated to the UK after fleeing Hong Kong, and Simon Cheng （鄭文傑）, a former British consular staffer who was granted asylum in the UK after alleging he was tortured in China.

Chinese state media reported that the six men were wanted for “incitement to secession and collusion with foreign forces.”

The move came a month after China introduced the National Security Law in Hong Kong.

Critics warned that the legislation would be used to target legitimate opposition and highlighted the unusual decision to make the law applicable to Hong Kong residents and non-residents.

That apparently gives China jurisdiction beyond its own borders.

Chu, who runs the Hong Kong Democracy Council, a Washington-based advocacy organization dedicated to furthering Hong Kong’s freedom and democracy, is the first person targeted under this aspect of the law.

Chu said that China was sending a clear message to other advocates by ordering his arrest.

“I would really emphasize how outrageous this really is,” Chu told reporters. “I am the first non-Chinese citizen that essentially is being targeted. I think they do intend to try to make this an example.”

Several countries have since suspended their extradition treaties with Hong Kong, including the UK, Australia and Germany, as a possible safeguard against attempts to use the national security legislation to round up advocates abroad.