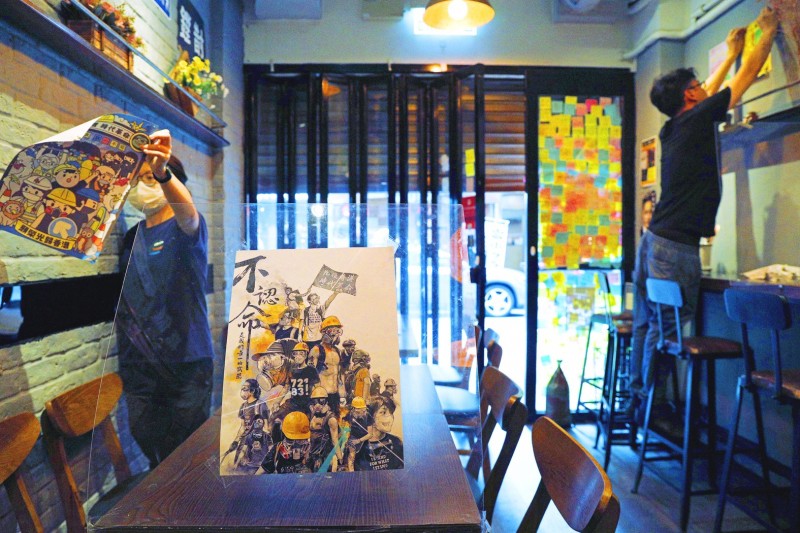 Speaking to reporters in Taipei, Chiu said the legislation was “the most outrageous in history” with a reach that extended everywhere.

However, the Taipei Economic and Cultural Office in Hong Kong would continue to operate, he said.

“We would not take the initiative to withdraw it, unless there are external factors,” he said. “We would stay until the last minute.”

In related news, the Chinese government and pro-Beijing activists in Hong Kong condemned what they called foreign meddling in the territory’s affairs, as more countries moved to offer Hong Kongers refuge and impose sanctions on Beijing over the new legislation.

Chinese Ministry of Foreign Affairs spokesman Zhao Lijian （趙立堅） said no amount of pressure from external forces could “shake China’s determination and will to safeguard national sovereignty and Hong Kong’s prosperity and stability.”

He urged the US to stop interfering in Hong Kong’s affairs, and not sign a sanction bill into law, referring to the US House of Representatives approval on Wednesday of a bill rebuking China over its crackdown in the territory.

If the bill becomes law, “China will definitely take strong countermeasures, and all consequences will be borne by the US side,” he said.

The Chinese embassy in London said that Britain’s offer to extend residency rights to up to 3 million Hong Kongers eligible for British National Overseas passports would be in breach of “international law and basic norms governing international relations.”

“We firmly oppose this and reserve the right to take corresponding measures,” it said in a statement, without elaborating.

Dozens of pro-Beijing advocates and lawmakers protested outside the US consulate in Hong Kong to demand that the US stop meddling.

They said they had gathered 1.6 million signatures online in support of its call.

“If it were, no one would dare violate it,” he said.

Meanwhile, Hong Kong Chief Justice Geoffrey Ma （馬道立） said that judges appointed to cases under the new legislation would be appointed on the basis of judicial and professional qualities, not politics.

In a rare statement, Ma said assigning judges to cases would be the sole responsibility of the judiciary, apparently seeking to allay fears that judges for national security cases would be picked by Hong Kong Chief Executive Carrie Lam （林鄭月娥）.

“Judges of foreign nationality are not excluded. They are expressly permitted to be appointed as judges in Hong Kong,” Ma said.

However, the Bar Association said the legislation undermines the territory’s independent judiciary and stifles freedoms.

In a five-page analysis, the association said that the new national security offences “are capable of being applied in a manner that is arbitrary, and that disproportionately interferes with fundamental rights, including the freedom of conscience, expression and assembly.”

Hong Kong Lawmaker Junius Ho, holding microphone, speaks during a demonstration against “American and foreign meddling in China’s internal affairs” near the US consulate in Central yesterday. Photo: Bloomberg