《TAIPEI TIMES》Taiwan, Japan, US seek to step up cooperation 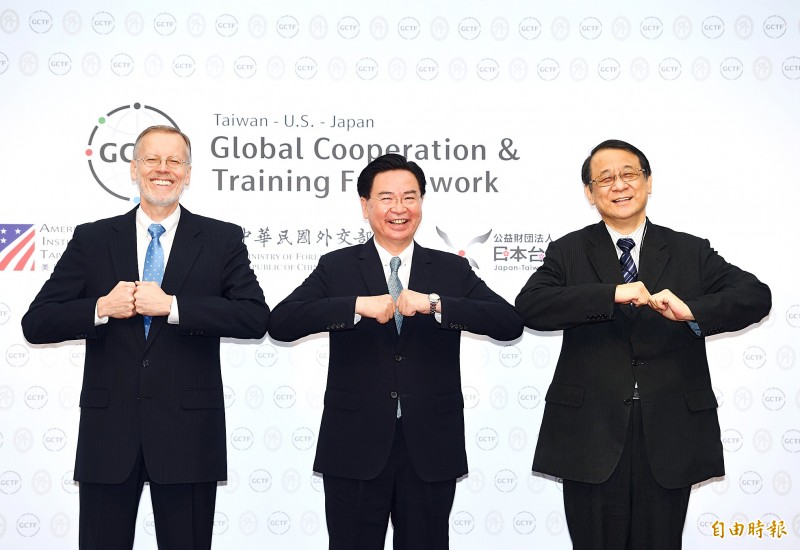 Taiwan, the US and Japan yesterday issued a joint statement announcing that they would seek greater cooperation under the Global Cooperation and Training Framework （GCTF） as they marked its fifth anniversary.

In a statement signed by Minster of Foreign Affairs Joseph Wu （吳釗燮）, American Institute in Taiwan （AIT） Director Brent Christensen and Japan-Taiwan Exchange Association Taipei Office Chief Representative Hiroyasu Izumi, the offices said that to bolster their partnership, they would be expanding the “frequency, size and scope of the GCTF workshops, including holding more events outside Taiwan,” as well as the “depth and breadth of participation from like-minded countries, including co-hosting programs.”

They would establish a GCTF task force as part of the ministry’s Department of North American Affairs to serve as the GCTF Secretariat, and a GCTF Alumni Network for former participants, the statement said.

Christensen told a news conference that when the framework was established in 2015, the international community did not understand the wealth of professional knowledge and valuable experience Taiwan could provide.

Unlike symbolic international forums, the GCTF is focused and practical, he said, adding that it is focused on topics that are most in need of discussion and it creates tangible results.

The GCTF is free of political interference, and its only purpose is to allow professionals to benefit from Taiwan’s experience and expertise, he said.

The US looks forward to continuing to work with Japan and Taiwan, allowing the world to understand that Taiwan is a reliable partner, democratic role model and force for good, and allowing “real friends, real progress” — which describes Taiwan-US relations — to become the spirit of the cooperation with countries in the Indo-Pacific region, he said.

Izumi said that Japan, Taiwan and the US share the values of freedom, democracy and human rights.

Japan is honored to join the framework, he said.

Japan joined the GCTF as a partner last year.

The theme of the GCTF is practical and meets the needs of the different nations, he said.

Taiwan has received international praise for its fight against the novel coronavirus and made a greater contribution to international society, he said.

Workshops have been affected by the COVID-19 pandemic, he said, adding that they would continue to be held in more flexible ways.

A page dedicated to the framework is to be created on the association’s Web site, he said, adding that the Japanese government hopes to cooperate more actively with Taiwan.

Japan would not, and cannot, leave Taiwan, he said, adding that Japan and Taiwan must act together.

Sweden and Australia have cohosted GCTF events, and the Netherlands is planning to join it.

The GCTF has held 23 international training programs in the areas of public health, women’s rights, energy security, information security and humanitarian aid, among others, inviting the participation of more than 500 government officials and experts from at least 38 nations.