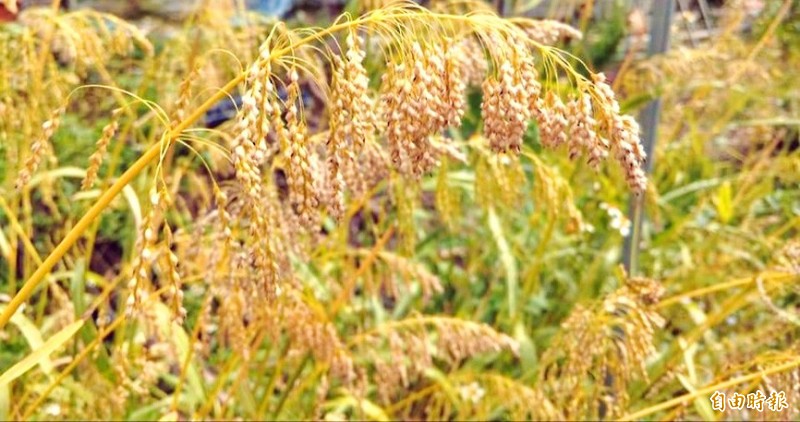 EASY CROP: A farmer said the plant, which looks similar to wheat, yields three harvests per year and despite its resilience, needs to be protected from birds and weeds

Eccoilopus formosanus is extremely resilient, able to survive droughts, colds and salinized soil, said Hsing, who is also a professor of agronomy at National Taiwan University.

It is easier to grow than most major high-yield crops — such as rice, wheat, corn, cassava or sorghum — the production of which is reliant on heavy irrigation, herbicides and fertilization, but Taiwanese oil millet does not require that much effort, she said.

Some bed-and-breakfast owners in Taitung participating in her research used the plant and yeast used by Aboriginal cultures to make bread and bagels, which were widely favored by guests, she said.

Chiu Kuei-chun （邱貴春）, a farmer who has grown Taiwanese oil millet for five years, said that the plant looks similar to wheat.

Bunun Aborigines mix it with crops such as quinoa, millet and rice, Chiu said.

It is a perennial crop that can yield three harvests per year, with each harvest lasting about a week, he said.

Despite its resilience, the plant can fall victim to birds, Chiu said, citing the first harvest of the crop on his farm this year.

Sparrows feeding on the plant resulted in an extremely low yield, he said.

Weeds are another risk factor, as young plants cannot compete with them, which makes weeding necessary, he said.

Hsing said that her research team is conducting extensive research on the plant in the hope that its special qualities could allow more applications.

For example, the team is developing a sunscreen based on the plant’s tolerance for salt, she said.