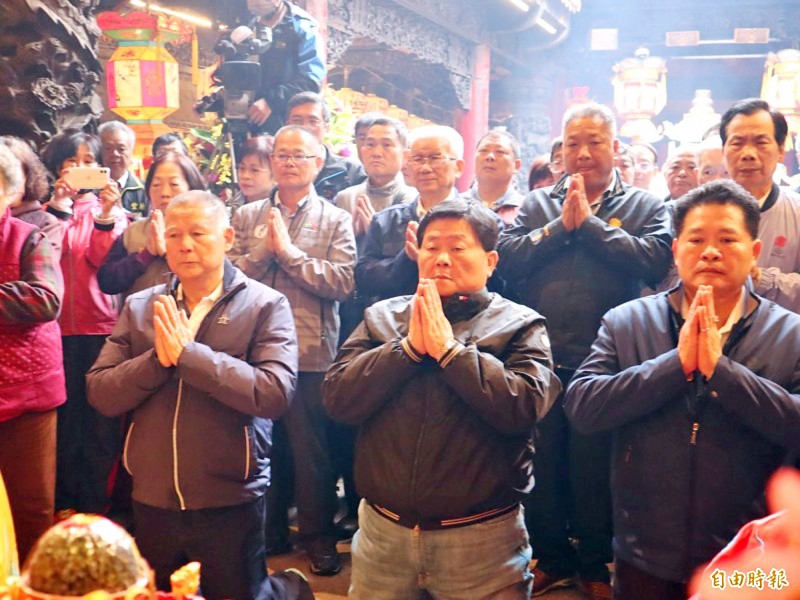 ‘VERY DISADVANTAGEOUS’: The minister of health and welfare asked followers of Matsu to take care of ‘themselves and one another’ and to ‘not worry’ the sea goddess

The Dajia Matsu Pilgrimage （大甲媽祖遶境）, the largest annual religious procession in Taiwan, is to go ahead as planned, its organizer said yesterday, despite calls by Central Epidemic Command Center officials for the event to be postponed amid concerns over the spread of COVID-19.

The procession, which starts in Taichung’s Dajia District （大甲）, is held yearly to celebrate the birthday of the sea goddess Matsu, with the Matsu statue from Jenn Lann Temple （鎮瀾宮） carried on a palanquin through central Taiwan over nine days.

Hundreds of thousands of pilgrims gather along the more than 340km route from Taichung to Changhua, Yunlin and Chiayi counties to celebrate the occasion and receive blessings from the goddess.

However, as the outbreak worldwide shows no signs of abating, there have been concerns that a religious gathering of such scale could spark an outbreak in Taiwan, especially as cluster infections linked to churches have been reported in South Korea and Singapore.

After discussing the issue with temples in central Taiwan, Jenn Lann Temple chairman Yen Ching-piao （顏清標） yesterday said that unless the central government orders otherwise, the procession would be held as scheduled from March 19 to March 28.

However, several prominent events that are part of the celebration would be canceled, Yen said, including an outdoor banquet that more than 10,000 people attended last year, a concert and a ceremony at Fengtien Temple （奉天宮） in Chiayi County.

The central government has yet to provide any specific guidance on the pilgrimage.

Deputy Minister of the Interior Chen Tsung-yen （陳宗彥） would only say that the Ministry of the Interior believes that large religious events should be carefully assessed, and that organizers should have backup plans ready if an event needs to be postponed.

Regarding the Dajia Matsu Pilgrimage, Chen said that the ministry has communicated with temple officials, who have proposed alternatives to certain aspects of the procession, including how they would carry the palanquin.

Minister of Health and Welfare Chen Shih-chung （陳時中）, who heads the center, took a sentimental approach on the pilgrimage, calling Matsu’s followers to safeguard their own health and not “worry” the goddess.

The COVID-19 situation is “very disadvantageous” for large events, he said, adding that the unpredictability of the coronavirus has made it a significant threat that is unlikely to be contained in the short term.

Despite conceding that the center must be cautious when making a decision about the time-honored religious event, Chen Shih-chung told a news conference at the center in Taipei: “I would like to make a call regarding religious events. Matsu is benevolent. People should take care of themselves and one another during the epidemic, and not worry Matsu.”

The COVID-19 situation must not be taken lightly, so if everyone’s minds are set on helping and benefiting one another, they would be willing to accept the outcome, he said, without elaborating on the “outcome.”

The Special Act on COVID-19 Prevention, Relief and Restoration （嚴重特殊傳染性肺炎防治及紓困振興特別條例）, which was passed on Tuesday, gives the head of the center the right to take any response measures necessary to contain the disease.