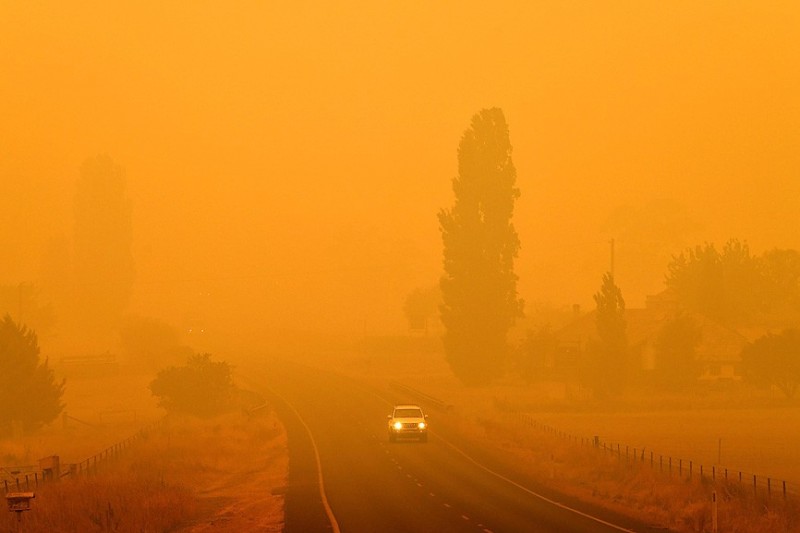 Vehicles travel on a road through thick smoke from bushfires in Bemboka, Australia, yesterday. Photo: AFP

‘UNPRECEDENTED’: The fires this season are estimated to have destroyed hundreds of properties and killed half of the country’s only disease-free koala population

A dangerous fire yesterday flared up in southeastern Australia even as cooler conditions elsewhere allowed authorities to begin assessing the damage from heatwave-spurred blazes that swept through two states on Saturday.

Officials told residents and others in the New South Wales （NSW） town of Eden to leave immediately and head north if they did not have a bushfire response plan.

“If your plan is to leave, or you are not prepared, leave toward Merimbula or Pambula,” the NSW Rural Fire Service said in an alert.

Tens of thousands of homes in NSW and Victoria states were without power yesterday as a large-scale military and police effort continued to provide supplies and evacuate thousands of people who have been trapped for days in coastal towns by the fires.

Initial estimates put damaged or destroyed properties in the hundreds, but authorities said the mass evacuations by residents of at-risk areas appear to have prevented major loss of life.

Twenty-four people have been killed since the start of this year’s wildfire season.

On Saturday, Australian Prime Minister Scott Morrison announced that 3,000 army, navy and air force reservists would be thrown into the battle against the fires.

However, the decision attracted complaints that he had taken too long to act.

“It is fair to say it was disappointing and some surprise to hear about these things through public announcements in the middle of what was one of our worst days this season with the second-highest number of concurrent emergency warning fires ever in the history of New South Wales,” he said.

Yesterday’s cooler temperatures and light rain forecast in some coastal areas in coming days could bring some relief, but officials said that would not be enough to bring the almost 200 fires still burning under control.

Fire officials said the next major flashpoint would come later in the week, but it was too early to gauge the likely severity of the threat.

“The weather activity we’re seeing, the extent and spread of the fires, the speed at which they’re going, the way in which they are attacking communities who have never ever seen fire before is unprecedented,” NSW Premier Gladys Berejiklian said.

Meanwhile, at least half of Australia’s only disease-free koala population, a key “insurance” for the species’ future, is feared dead, with more badly hurt after bushfires swept through an island sanctuary, rescuers said.

Kangaroo Island, a popular tourist attraction off the coast of South Australia, is home to many wild populations of native animals, including the much-loved koala, where the populated was estimated at 50,000.

Massive bushfires have flared up in the vast country’s southeast in a months-long crisis, killing nearly half a billion native animals in NSW alone, scientists have estimated.

Conditions have been particularly severe in the past few days, with a blaze on Kangaroo Island spreading rapidly and razing 170,000 hectares — one-third of the island — on Friday.

“Over 50 percent [of the population] has been lost,” Sam Mitchell of Kangaroo Island Wildlife Park, which is raising funds to care for the injured koalas, told reporters. “Injuries are extreme. Others have been left with no habitat to go back to, so starvation will be an issue in coming weeks.”

The koalas cannot be removed from the island due to their disease-free status, the state government said