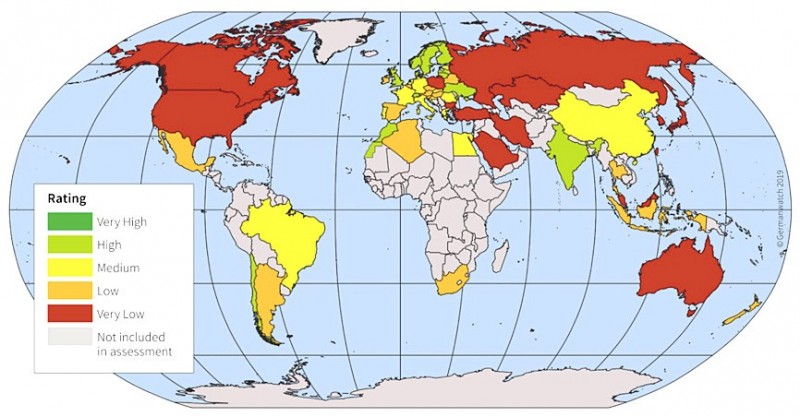 A map shaded to show the climate-change performance of different nations is pictured in an undated photograph. Taiwan, the US and Saudia Arabia were ranked in the three lowest positions in the Climate Change Performance Index, released on Tuesday. Photo: screen grab from the Germanwatch Web site

LOW PLACES: Taiwan fell three places from last year in a climate change index report, which positioned it with the worst performers, but the EPA claims it was ‘unfair’

Taiwan’s overall rating fell three places from last year in the Climate Change Performance Index （CCPI） and it is grouped with Saudi Arabia and the US as the bottom three performers, an annual report released on Tuesday showed.

The report, which was released by Germanwatch, along with the Climate Action Network and the NewClimate Institute, on the sidelines of the global climate summit in Madrid, evaluated the performance of 61 countries.

It reviewed the nations based on how well they managed greenhouse gas （GHG） emissions, which had a 40 percent weighting, on renewable energy （20 percent）, energy use （20 percent） and climate policy （20 percent）.

Referred to as “Chinese Taipei” in the report, Taiwan scored 6.02 points in managing GHG emissions, 1.56 points in promoting renewable energy, 7.54 points in energy use and 8.21 points in climate policy, totaling 23.33 points, which placed the nation at 59th.

In the GHG emissions category, Taiwan was ranked 60th, only better than Saudi Arabia, the report showed.

The bottom two performers were the US, which scored “very low,” and Australia, which received a zero, it showed.

In a statement yesterday, the Environmental Protection Administration （EPA） said that the CCPI evaluation did not account for varied national situations and development courses.

As Taiwan is not a UN member, the index review committee could not obtain the latest data about its carbon sink, GHG emissions, energy efficiency and renewable power data through UN-related systems, which resulted in an “unfair” evaluation of Taiwan, the agency said.

The index applied identical standards to assess all selected countries without considering the historic and future accountabilities of greenhouse gas emitters, and therefore Taiwan was poorly evaluated, even though its carbon intensity — measured by dividing a country’s annual carbon dioxide emissions by its GDP — is lower than the global average, it said.

Conflicting views could result from different statistics, as Taiwan was ranked 23rd of 180 countries in the Environmental Performance Index released last year by the Yale Center for Environmental Law and Policy, it said.