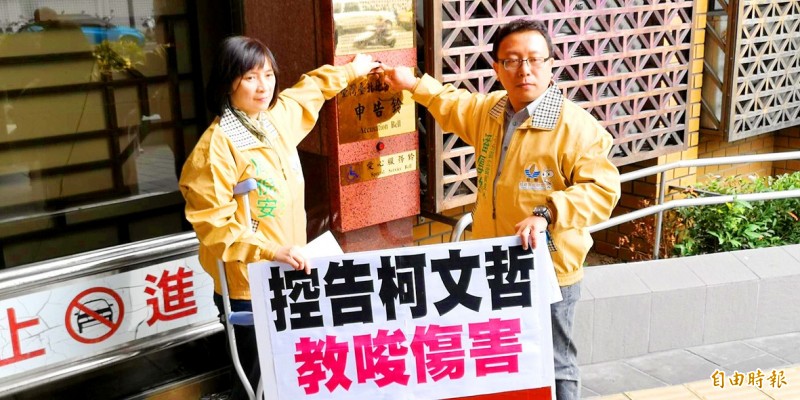 The KMT’s Tainan chapter posted the image on Facebook. In it, cartoon versions of Tsai and her running mate, former premier William Lai （賴清德）, are depicted with two fingers outstretched and the slogan “Taiwan must win, vote for No. 2,” Yen said.

However, the Central Election Committee on Monday announced that for the Jan. 11 presidential election, the KMT would be No. 2 on ballots and People First Party Chairman James Soong （宋楚瑜） is No. 1, with the Democratic Progressive Party’s （DPP） Tsai and Lai at No. 3.

The image aimed to mislead DPP supporters into voting for Han and constitutes a breach of election law, Yen said.

“The KMT is resorting to such low-class, disgraceful tactics to confuse voters. It is sad that it has sunk so low, as its usual method to win elections is to use misinformation,” Yen said.

The message purportedly instructs Han supporters to write his name on ballots to ensure they are counted for him, she said.

“If people write things on their ballot, it will become invalid. The people behind this wrongful message are misrepresenting election rules to diminish support for Han,” Wang said.

She demanded that police investigate who is behind the message, insinuating that it could have been created by an alleged “Internet army” run by Yang Hui-ju （楊蕙如） to influence public opinion.

The group was led by former TSU legislator Chou Ni-an （周倪安）, who said that she was assaulted and restrained by a male police officer at Taipei City Hall during a protest organized by the party on Nov. 28.

“The male police officer bear-hugged me and we fell to the floor, resulting in me sustaining an injury to my foot that required medical treatment,” Chou said. “It was an assault, so we are filing assault charges.”

Despite repeated attempts to ask Ko for an explanation, he has refused to provide one, leading the TSU to believe that Ko instructed police to use forceful tactics to repel the protesters from city hall, Chou said, adding that Ko had infringed upon their right to protest as citizens of a democratic society.