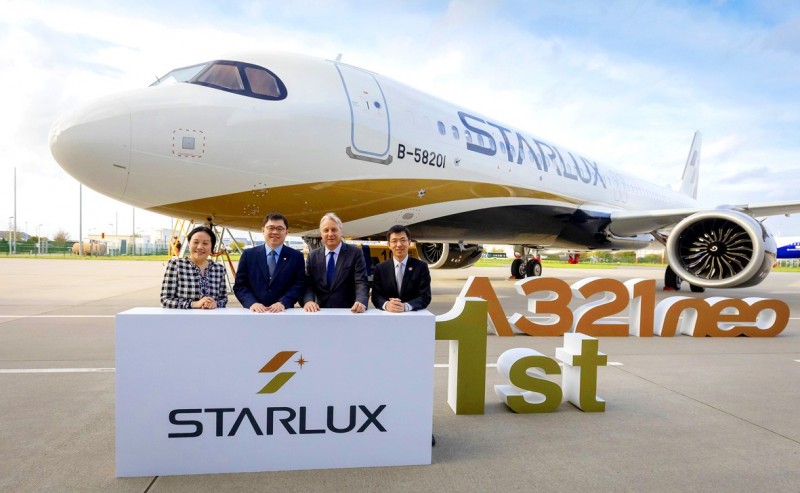 A StarLux Airlines plane is pictured in an undated photograph. The Ministry of Transportation and Communications yesterday approved the carrier’s application to operate. Photo courtesy of Starlux Airlines

StarLux Airlines Co （星宇航空） has officially become the nation’s seventh international carrier after the Ministry of Transportation and Communications approved its application yesterday.

The Civil Aeronautics Administration （CAA） last week forwarded StarLux’s application to the ministry for final approval after the carrier passed four of the five certification procedures stated in the Regulations of Civil Air Transport Enterprise （民用航空運輸業管理規則）.

They included procedures the company was obligated to complete before and after it filed the application, as well as the CAA’s review of its paperwork and aircraft tests.

The fifth and final stage was approval by Minister of Transportation and Communications Lin Chia-lung （林佳龍）.

The CAA will be in charge of issuing an air operator’s certificate to the airline following the ministry’s approval, Lin said.

The airline code is used to label the flight number in the ticket-booking system, it said.

The company has not announced when travelers can start booking tickets for the three inaugural flights.

Media reports had said that StarLux chairman Chang Kuo-wei （張國煒）, who is a licensed pilot, could operate one of the inaugural flights himself.

However, StarLux spokesman Nieh Kuo-wei （聶國維） said that it is not likely, as Jan. 23 would be the first day of the airline’s operation and Chang would be busy hosting guests.

“We will not engage in a price war with other airlines, even though we are a new carrier. By the time we launch our operations, the nation will be about to celebrate the Lunar New Year holiday and many people are scheduled to travel and return homeduring that period. We will consider offering discounts from time to time after the launch of our services,” he said.

The company has leased 10 Airbus A321neo aircraft, with the first one arriving at the end of October.

The second and third aircraft are to arrive this month and in the middle of next month.

Deliveries of all 10 aircraft should be completed by 2022.

StarLux this year also signed a contract to purchase 17 Airbus A350 aircraft, which are to be delivered between 2021 and 2024.

It is scheduled to launch flight services to the US using the A350 aircraft in 2022.